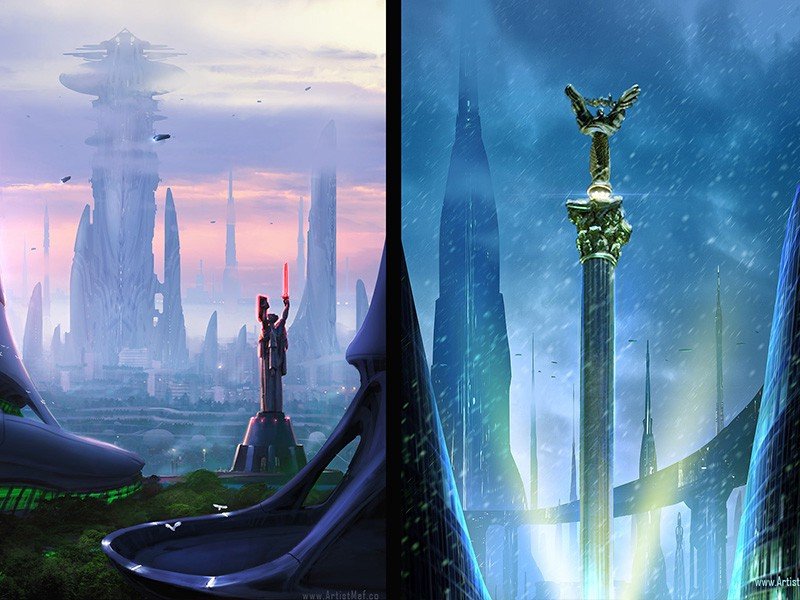 I am a Ukrainian but also lived in Finland, Germany, and the US. I was born in the town of Enerhodar, which has the infamous nuclear power plant that made the world hold its breath when it was fired at. I am a startup entrepreneur and a Ph.D. candidate.

In this article, I attempt to paint a possibility of a hopeful future for Ukraine. It could be wishful thinking, but I believe this exercise is valuable for two reasons. Firstly, to make better decisions, we need to be aware of all the possibilities. Secondly, this is a reminder for everyone what Ukrainians are fighting for.

I will cover the past and the present first, to explain my vision for the future.

When Russia started its “military operation” in Ukraine, its president Putin said that Ukraine is an artificial nation without history. The irony is that Kyiv, the capital of Ukraine, is way older than Moscow, the capital of Russia.

Many doubt the Ukrainian cultural heritage. Here is another example.

“The constitution of Philip Orlik in 1710 is the first in the world to regulate the rights of a vassal and his subordinates. Subsequently, similar documents were adopted in the United States (1787), France, and Poland (1791). The constitution of Philip Orlik was in fact an agreement between the hetman of the Zaporozhian Army Philip Orlik and the Cossacks with the chief (on their behalf, the document was signed by the basket chieftain Kost Gordienko). The document was written in two languages — Latin and Old Ukrainian.”

The present day (19th March, the 24th day of the Russo-Ukrainian War)

Ukraine became a symbol of human dignity. Ukraine stands up to bullies, stands up for freedom, human liberty, and humanity.

The Ukrainian government is admired universally. Ukrainian president Zelensky is heralded as an international hero, and compared to Churchill, for his courage, leadership, and media skills.

And these are not just empty words. The Ukrainian government is not only shrewd militarily, but they are also extremely innovative with their Ministry for Digital Transformation.

“Launched in 2020, the Diia app allows Ukrainian citizens to use digital documents in their smartphones instead of physical ones for identification and sharing purposes. The Diia portal allows access to over 50 governmental services.”

The Ukrainian government has also inspired the West to unite. Zelensky has received a bipartisan standing ovation wherever he spoke. In his recent TED interview, historian Yuval Noah Harari said that liberalism and nationalism go hand in hand in Ukraine as they unite around the values of freedom, human liberty, human dignity.

Considering the current damage the war has already inflicted, many Ukrainian cities would have to be rebuilt from zero. Not small towns, either. Kharkiv which was razed to the ground used to have 1.4 million inhabitants.

I asked my friend, an urban architect, about the fate of damaged buildings in Ukraine. She said that the common practice is to demolish and rebuild from the ground up if less than 30% of the building is still populated.

As a startup entrepreneur, I see a huge opportunity in rebuilding from zero, with no legacy in the way.

Another factor right now is the refugees fleeing Ukraine. The current count is more than 3 million people. Mostly, these are women and children. I see a huge advantage in this too. Most Ukrainians have never been abroad. This event will allow Ukrainians to see Europe firsthand, and make friends there. I work with refugees and based on what I’ve seen, many of them are highly likely to come back, too.

Where this all leads

Russian cultural elites, artists, and scientists will flee to Ukraine from their analog of state-controlled North Korea. The capital of the Russian people will return to its cultural heritage, Kyiv, after the millennia of meandering.

War will have its traumatic effects on the Ukrainian psyche. Because of it, “therapy for every citizen” will be the new governmental slogan. Over time, therapy for everyone will become the default.

Burned buildings will be turned into hipster nightclubs and strive for the vibe one can find today in Berlin. It will be something to wear on the sleeve.

Crypto and digital currencies could become the mainstay as the Ukrainian government will be spending millions of Bitcoin and Etherium they have received in donations.

Ukrainian war might even liberate Germany from the past. You are not nazis, you can pick the gun to defend someone. You don’t need to be afraid of violence and carry the huge guilt if you are defending yourself from the bully.

Ukrainian dream will not be a copy of the American dream. It will be about building the country of our dreams and having the right to exist as people.