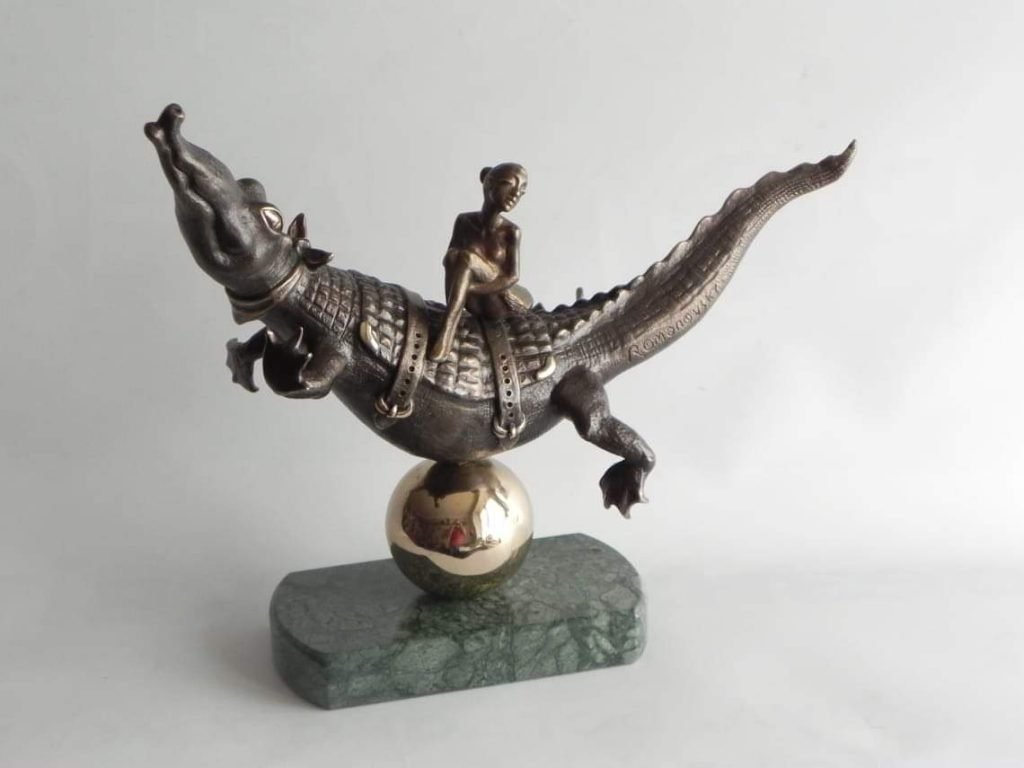 Courtesy of Hiscox.Online art sales volume continued to grow in 2018, albeit at a slower rate than in previous years, totaling $4.64 billion, according to the latest addition of the annual Online Art Trade Report, which was released on Tuesday by Bermuda-based insurance company Hiscox Ltd. The online art market grew just 9.8% in 2018, a drop from 12% in 2017, continuing a slowdown in growth that dates back to at least 2015, when it grew at a breakneck rate of 24%.Despite the slowdown in growth, the report’s authors optimistically estimate an average future growth rate of 15% annually for the online art market, which would bring its total sales to $9.32 billion by 2024. The Online Art Trade Report’s numbers vary from those in the 2019 edition of art economist Clare McAndrew’s The Art Marketreport, released last month, which calculated $6 billion in online art and antiques sales in 2018—about 9% of global art sales for the year—for an increase of 11%.

Courtesy of Hiscox.The growth rates in both McAndrew’s report and the Hiscox report reveal that the online art market has been lagging behind e-commerce retail in general, which grew by 18% in 2018. However, the Hiscox report notes that online art sales may be benefitting from growth in other e-commerce sectors, as 73% of art buyers said they had bought other products in a similar price range online before buying art online. In 2017, that figure was just 68%.The report draws on data provided by market analysis firm ArtTactic, which surveyed 706 art buyers and 128 galleries and dealers; and interviewed 42 staff members at online art platforms. In his foreword, Hiscox’s head of art and private clients, Robert Read, noted that the online art marketplace remains crowded, and predicted “consolidation and casualties” as the “online art market plods on.”

While online art market growth may be plodding, one key trend has emerged: Big spenders—defined by Hiscox as collectors who spend more than $100,000 per year on art—are increasingly comfortable browsing and buying art online. The report notes that these big spenders are the most frequent visitors to online sales platforms, with 50% of them visiting multiple times per week—a big jump from the previous year, when just 38% of big spenders made multiple virtual trips per week to online art vendors. And those increasingly frequent visits are translating to more transactions—47% of big spenders said they bought art online in the last 12 months, up from 30% in the 2018 report.

It may not come as a surprise to hear that millennial collectors are more active art buyers than their older counterparts. According to the Hiscox report, 79% of millennial collectors said they bought art more than once in the last 12 months, an increase of 15% over last year’s report. And, increasingly, it is this age bracket of collectors who favor buying art online. The report suggests that online art platforms are serving as gateways for new collectors—23% of millennial collectors said they bought a work of art online before completing a single transaction IRL at a physical venue like an auction, an art fair, or a gallery; that figure is up 18% from the year before. And in addition to serving as art-market entry points, online sales platforms are becoming the favored place to transact for millennial collectors, with 29% of them saying they prefer buying art online, a major bump up from 14% a year earlier. It’s not entirely surprising, then, that millennial collectors are the most likely to buy art from their smartphones—32% said they preferred to make online art purchases from their phones, an increase of 8% over 2017.

The report notes that while auction houses have been quicker to create their own online sales mechanisms, galleries have primarily relied on third-party platforms. But two of the world’s biggest galleries, David Zwirnerand Gagosian, have launched online viewing rooms in the past two years—with Gagosian notching a $6-million online salelast month—and the Hiscox report anticipates other dealers following suit in 2019.“The move by Zwirner and Gagosian is most likely a response to the increasing focus that the major auction houses such as Christie’s and Sotheby’s are putting into digital and online technologies in their aggressive pursuit of the millennial collectors,” said Anders Petterson, the founder and managing director of ArtTactic. “I believe these models will evolve further and co-exist with third-party platforms, traditional offline sales, and ultimately just be one additional channel to cultivate the next generation of art collectors.”But if more dealers do adopt the online viewing-room model, one unknown will be the level of transparency they maintain around online sales. While transparency has been a priority for some third-party platforms, galleries and dealers have long been opaque or outright secretive with their sales data.“I don’t think these platforms will do much to increase the overall transparency in the market,” Petterson added, “which will continue to be a major impediment for online art buyers, with 87% of survey respondents this year saying that price transparency was a major factor in their decision to buy art online.”

Whether due to a lack of transparency, a fear of forgeries, or general misgivings about dropping a hefty sum on art sight-unseen, establishing trust remains crucial for sellers offering art online. The Hiscox report noted that forgeries and fakes were a concern for 62% of online art buyers this year, an increase of 10% from 2018.Perhaps unsurprisingly, then, the four online art platforms most trusted by buyers were major auction houses with track records stretching back decades or even centuries: Christie’s, Sotheby’s, Phillips, and Bonhams. Online art platforms are well aware of the trust issues among their potential clientele, and 64% of those surveyed for the Hiscox report said brand recognition and consumer trust were the biggest roadblocks to expanding the online art market.Petterson saw signs of progress on that front, suggesting that growing trust in the online art market was a major factor in the uptick of big spenders buying online in 2018. He saw this as “a result of people’s general online buying habits [and] the fact that the online art industry is maturing (and track record and trust is building up around specific platforms).” He also credited sellers for helping to instill trust by offering more top-shelf works online, insisting that “art sold online is not second-rate or bargain-hunting material.