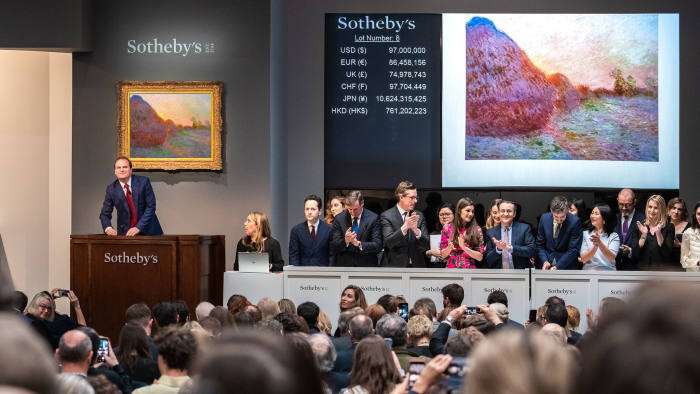 Despite pre-Brexit jitters and the decline of some fairs, auctioneers still had plenty to celebrate

Markets typically hate uncertainty, and the art market’s recent record has shown just how much. In 2019, at the end of a nervous decade, it trod water, as geopolitical jitters held back would-be sellers. Prime works still attracted demand — notably tried and tested 20th-century paintings — but overall the international market retrenched from the heady, risk-taking years at the beginning of the century. Full figures are not yet finalised, but ArtTactic’s initial compilation of auction sale results at Sotheby’s, Christie’s and Phillips in 2019 (up to mid-December) shows a fall of 21 per cent year on year, from $12.2bn to $9.6bn, following two years of growth.

It wasn’t all gloom, though. Wealthy Americans showed their backbone, and at May’s season in New York some $1.7bn-plus of art was sold across five auctions in one week. These included this year’s top-priced work, Claude Monet’s haystack painting “Meules” (1890), which went for $97m at Sotheby’s. Once fees were added in, the work cost a full $110.7m and so became the only piece to reach nine figures during the year — something that happened more frequently in 2018.

In the same season, a Jeff Koons notched up the highest price for a living artist when his three-feet high, stainless steel “Rabbit” (1986) sold from the collection of the late publisher Si Newhouse for $80m ($91.1m with fees). This shiny bunny also stood out as a rare case of a top lot not being guaranteed to sell by the auction houses or a third party. Such controlled outcomes are not to everyone’s taste — “it can be like gatecrashing someone else’s party,” says one art buyer — but in nervous times, guarantees have become a safety net that helps maintain supply.

But the biggest art market news of 2019 came not from the sale of a work, but of a whole auction house — the billionaire telecoms and media mogul Patrick Drahi’s surprise takeover of Sotheby’s, completed in October. His $3.7bn deal produced serious windfalls for senior staff, not least its then chief executive Tad Smith — though many then swiftly lost their jobs under his replacement, Charles Stewart.

How this plays out is an open question, given the pressures on the auction houses’ business model. Traditional ways of buying and selling have fragmented considerably, with options ranging from Instagram to boutique, high-end art advisers. “There’s more choice — more art fairs, more online auctions — while at the same time buyers are getting pickier. The gap between good and great works keeps growing,” says private adviser Melanie Clore, co-founder of Clore Wyndham.

That proliferation of choice is affecting art fairs, too. Those that have closed this year include Independent in Brussels and Art Berlin, with difficulties securing venues and financial woes seemingly to blame. Dealers also say the proportion of sales that galleries make through fairs is shrinking (this has averaged about a third in recent years).

“Fairs are still important for visibility and to be part of the action, but I am trying to rely on them less,” says London-based dealer and gallerist Kate MacGarry. The silver lining, she adds, is that “I’ve made more sales through the gallery, which was always the aim.” Her plan is to focus more on fairs closer to home — this year she showed at Art Basel, Frieze London and Fiac in Paris — as the effort and expense of further-flung events continue to be reassessed by most gallerists.

The growth of China has proved the decade’s most significant driver, having largely rescued the international art market from a prolonged slump. In the wake of the credit crunch, the country’s expanding wealth and cultural curiosity supported the market. And when, in 2014, a Christie’s New York auction made a total of $744.9m from just 68 lots, Asian buyers accounted for half of the top 10 sales.

China’s growing importance means eyes have been fixed on this year’s unrest in Hong Kong which, together with the tariff tit-for-tats between the US and China, represent huge risks to confidence in the art market. From nearly nowhere, Hong Kong is now a top-three market centre alongside New York and London, and vies with those cities for the finest consignments. So far, auctions have performed well since the protests began — in some cases better than last year, particularly for international contemporary art — but there are still nerves. It remains to be seen what the impact will be on the Art Basel fair in the city this coming March.

New York has continued to provide muscle for the market, particularly as this year’s gains on Wall Street have put money in the pockets of art buyers. That has been in stark contrast to London, where the uncertainties surrounding Brexit have had a negative effect on consignments. Paris proved a beneficiary, with auction records made for artists including Nicolas de Staël (€20m at Christie’s) and Pierre Soulages (€8.2m hammer price at Tajan), as well as the landmark opening of a David Zwirner gallery in the city in October.

It is difficult, of course, to predict what will happen next, but from the financial market’s point of view, 2019 in the UK ended on a relative high — certainty that Brexit will happen soon beating out uncertainty about what that might mean. At the very least, this had an immediate positive impact on auction houses: one London specialist said that some consignors had been waiting for the December election result before fully committing their works for sale.

With 2019 set to be one of the warmest years on record, the art market has thankfully begun to assess its own carbon footprint. Auction houses are reassessing the number of printed cata­logues that they send around the world, while art fair organisers know the onus is on them to make the events they organise sustainable — or at least as sustainable as possible. “Producing and hosting an art fair is like building a small city that exists for only five days,” says Nicole Berry, executive director of New York’s Armory Show. “Like in any industry, we aspire to improve efficiencies and reduce our footprint.”

Collectors seem to agree. A recent UBS survey of wealthy collectors in the US found 86 per cent of 368 art buyers were willing to pay extra for more sustainable ways to own art, including taking delivery via sea or land (versus air), as well as commissioning more art activities locally. Indeed, one in four said they were willing to pay 25 per cent more for environmentally friendlier options. This has been borne out in some charitable sales. In May, Los Angeles-based artist Jonas Wood donated a painting, “Japanese Garden 3” (2019), to a Christie’s evening auction, to create and fund a National Park, with matching funds from the Global Wildlife Conservation and the Rainforest Trust. The work sold considerably ahead of its estimate of $500,000-$700,000 for $4.9m — a record price for this in-vogue artist.

One question going into 2020 is whether the art market can address another kind of sustainability, and begin to address the struggles at the lower end of its chain.

Nick Hackworth, curator of Modern Forms, a private art collection and platform founded by financier Hussam Otaibi, argues strongly that rebalancing is needed: “It’s time for a redistribution of wealth and attention away from the blue chips towards emerging artists, younger galleries and project spaces,” he says. This year, Modern Forms launched a project called Credit with Central Saint Martins art school in London, to tackle such issues.

Others are also rethinking models of patronage, and how collecting might adapt. There is, for example, much talk about collectors offering more meaningful, longer-term support to an artistic project or a gallery publication instead of buying a standalone object. Looking ahead, Hackworth predicts a shift “in the next decade”. Such noises have been made before — but when potential buyers call the shots, the market tends to respond.