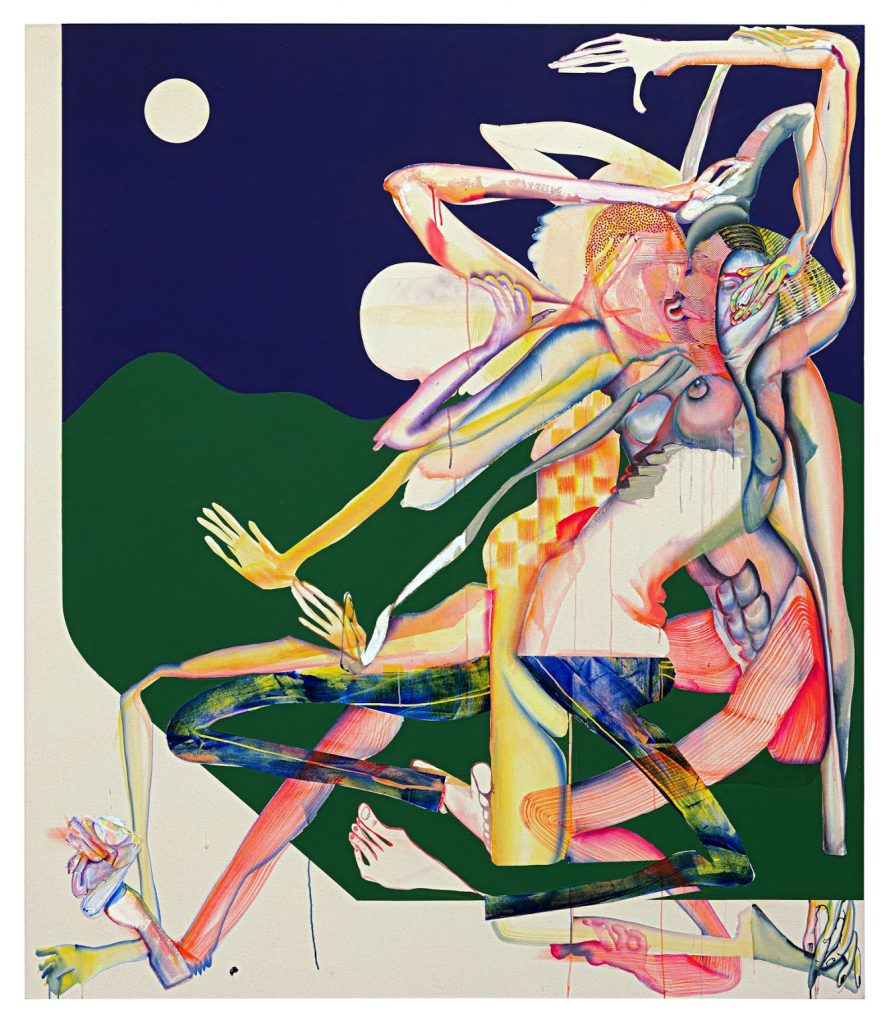 Sotheby’s capped the end of a two-week run of nearly nightly auctions in New York with a double-header tonight, May 19: the “Now” sale followed by its marquee contemporary art evening sale, which altogether reeled in $283.4 million, bringing the auction house’s seasonal auction total to a record $1 billion.

The energy in the room was palpable. As soon as auctioneer Michael Macaulay opened up the first lot, Anna Weyant’s Falling Woman (2020), the rate at which bids came in made the sale feel more akin to a livestock auction than one of fine art. Naturally, Falling Woman set a new record for the 27-year-old artist at $1.6 million on a laughable low estimate of $150,000.

But the star of this lot was Christina Quarles’s vibrant figurative work portraying a couple locked in heated embrace beneath the moon. Titled Night Fell Upon Us Up On Us (2019), the piece’s estimate was set between $600,000 to $800,000; it sold for $4.5 million.

“She’s an amazing painter,” Noah Horowitz, Sotheby’s worldwide head of gallery & private dealer Ssrvices, told me during the sale. “But nobody quite saw thatcoming.” Quarles’s previous record, at $686,000, doesn’t even compare.

A majority of the lots in the “Now” sale were by female artists, and in total, works by women accounted for $28 million worth of sales tonight, with all but one lot exceeding its high estimate.

Yet the marquee lot of the first portion of the night was Kerry James Marshall’s Beauty Examined (1933), which portrays a Black female figure laying on what appears to be a hospital bed. It sold for $13.5 million.

Proceeds from the sale will go directly to benefit Loma Linda University, a Seventh-Day Adventist college outside Los Angeles. Another piece’s revenue will also go directly to a nonprofit: a desk designed by the late Virgil Abloh in 2019 sold for $151,000 to fund his foundation, which provides scholarships for Black college students.

Other highlights included Matthew Wong’s The Night Watcher (2018), which nearly tripled its high estimate of $2 million to bring in $5.9 million. An exuberant Stanley Whitney canvas sold for $2.3 million, and a piece from Damien Hirst’s lockdown project, Happy Life Blossom (2018), raked in $5.9 million.

After a quick break, Oliver Barker was on the rostrum for the second portion of the evening’s events, which predominantly focused on 20th-century artists.

Leading the sale was Francis Bacon’s Study of Red Pope 1962, 2nd Version 1971, which netted $46.3 million. The piece had been in private collections since 1973, when it was acquired from Marlborough Fine Art in Zurich. It was held in the same private collection as the second-most expensive lot of the sale, a key work from Cy Twombly’s “Blackboard” series from 1969, which sold just under its low $40 million estimate for $38 million.

Among the most hotly watched pieces from the sale was Ed Ruscha’s cheeky, all-American Cold Beer Beautiful Girls (1993), which sold for $18.8 million. Five works by Georg Baselitz, meanwhile, sold for a total of about $24 million. One work, a sculpture titled Women of Dresden – Visit from Prague, sold for $11.2 million, setting a new auction record for the German artist.

Andy Warhol’s Elvis (1963) brought in $21.6 million, which ranks among the top prices achieved for one of his depictions of the King of Rock ‘N’ Roll.

After such a healthy sale (it had a 98 percent sell-through rate), Barker remarked to the audience about the long weeks that preceded the auction, saying: “I need a drink!” Judging by the applause in the room, he was not alone.