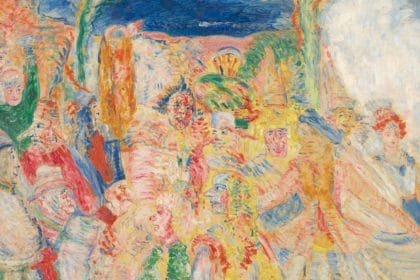 Royal Museum of Fine Arts Antwerp (KMSKA) in collaboration with the blockchain digitization Tokeny Solutions, and blockchain art entity Rubey, has tokenized investment in Fine Arts according to a recent report. This has made KMSKA the first European museum to make this move. This will begin with Belgian painter James Ensor’s (1860–1949) painting, “Carnaval de Binche.” Investors will have to spend around $158 to become a fractional owner of the masterpiece. The tokens are being launched on the Polygon blockchain, and are ERC-3643 compliant.

“We share the same vision as our partners KMSKA and Rubey that security tokens will have a real impact on the art industry by allowing smaller investors to invest and engage in artworks that already have existing value,” said Luc Falempin, CEO of Tokeny.

It is worth noting that the Art Security Tokens are backed by Debt Instruments in the transactions, and this is unlike Non-Fungible Tokens (NFT). To issue securitized tokens compliant with regulations, Rubey selected Tokeny’s tokenization APIs.

“KMSKA already had the largest Ensor collection in the world. The addition of Carnaval de Binche puts our museum on the international map as an Ensor center of excellence even more,” said Luk Lemmens, President of KMSKA.

For some time now, expensive Fine Art pieces have only been accessible to affluent individuals. This influenced the collaboration aimed to ensure that everyday users can become co-owners of such masterpieces.

According to Peter Hinssen, Rubey’s partner and Tech Entrepreneur, it is very convincing that this joint effort has nothing to do with hype but the beginning of a new revolution. He stated that even though the Security Token is the ultimate revolution in the blockchain industry, it is important to pay attention to the social element.

Months ago, Sygnum Bank AG closed the subscription to its first Arts Security Token, thus the ownership right to “Picasso’s Fillette au béret” painting. Having admitted that the Art market is very difficult to enter due to the financial challenges likely to encounter, he lauded the fractionalization or co-ownership that has been made possible by art tokenization.

However, there are challenges. NFT ART, the right of co-owners have to be legally defined and properly recognized to protect investors. Also, it was realized that there should be an exit option to consider that price appreciation can also be observed.

Interestingly, these challenges were offset with the introduction of AST to the blockchain.

“At the close of subscription, more than 50 investors had subscribed to the Fillette au béret, clearly demonstrating the viability of Sygnum’s legal framework, and establishing real demand for co-ownership of art,” Sygnum announced.