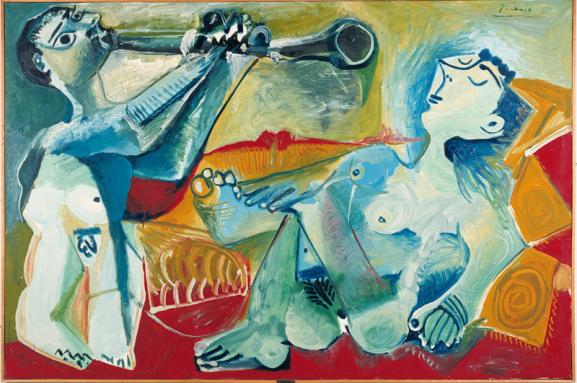 He did not play any instrument and did not know how to read a score … And yet, these three works by the cubist painter, to be discovered at the exhibition “Les musiques de Picasso” at the Philharmonie de Paris, show us the influence music about his life and his work.

It was one of the definitive and provocative phrases he had a secret: “I don’t like music.”  However, Picasso’s entire work proves the contrary. If he did not like “scholarly” music, he had made his own that of the humble, the acrobats: the music of cafes, that of the street. And above all, he was fascinated by instruments. This is what we learn in particular in the exhibition Les musiques de Picasso at the Philharmonie de Paris. We summarize Picasso’s passion for music through three emblematic works.

The Harlequin is a major figure in Picasso’s iconography. After the blue period, the painter abandoned the crowds for solitary subjects, but he still continues to paint the world of entertainment. Familiar with the Médrano circus, where the orchestra plays fashionable music and songs during the numbers, Picasso multiplies the paintings of these acrobats from the “commedia dell’arte”, representing musicians, always associated with characters from the popular entertainment world he is fond of. Here, it is about a Harlequin, holding a guitar, and one guesses behind the costume the self-portrait. The native Spain dear to the painter, with its music – flamenco, jota, and other bullfighting music – is never far away. And if Picasso doesn’t like the ”

Two scores for piano and voice are at the origin of the six papers pasted with sheet music that we know today by Picasso, among which  Violin and sheet of music. Printed scores, where notes and texts are perfectly legible, and whose sentimental content is redoubled by the presence of the metaphorical instrument, are often used by the painter to sing his love. We can also see his fascination with notes and the shape of instruments. Picasso loved going to luthiers, where he observed the disarticulated instruments. In his workshop, where he also collected guitars, violins and other mandolins, he liked to take these instruments apart and put them back together in his own way. He drew geometric shapes with which he played in many paintings, of which Violin and sheet of music , produced in 1912 in Paris, is just one of the examples.

Picasso was more than 85 years old when he found the figure of the “painter-musician” in monumental formats in his villa in Mougins. He paints many dawns and serenades in which the man charms his beauty with melodies. The man of the stage seduces the woman, captivates the audience, defies the test of time and the lurking death … Picasso’s late work is filled with rural rounds, intimate concerts, like a homecoming. The music player is at the forefront in these monumental designs. The music is enchanting, haunting, primitive. Languid in an immodest pose, her head thrown back and legs crossed, the beauty is as if intoxicated by the melody. The ultimate ode to life, to seduction, and to the flesh, by Picasso, passes once again through music.