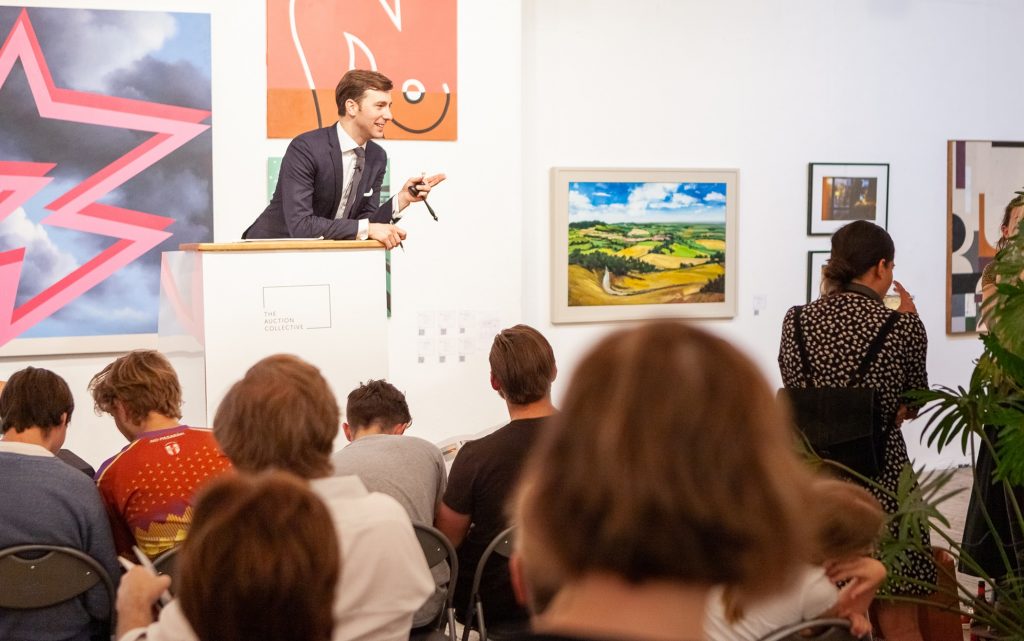 Brought to you by

Given the age and status of the UK’s longest-standing auction houses, it’s unsurprising that breaking into the world of bidding, buying and selling can seem intimidating. Tom Best was still at university when he approached Christie’s to enquire about attending his first sale. Unsure of the protocol, he even asked whether he needed to wear black tie. The first pop-up auctions were held in London’s Shoreditch, with Instagram serving as the catalogue

“The whole experience can seem incredibly complicated,” he says. “I don’t think it’s intended to be, but it adds to people’s fear of getting involved.”

It was this desire to improve levels of transparency within the industry that led to the founding of The Auction Collective in 2017. Mr Best had worked at Christie’s for seven years by this point, first in its impressionist and modern-art departments, and then as a post-war and contemporary specialist. As the company’s youngest auctioneer in recent history, he was clearly determined to break the mould in more ways than one.

“At a traditional auction, if you place a successful bid, you’re then presented with a 25pc buyer’s premium,” he explains. “There’s VAT on top of that and resale fees, then – finally – you have to work out how to ship the piece. I’d heard many buyers and sellers expressing frustration about all this, to put it politely.”

By contrast, The Auction Collective works directly with artists, often at the lower-value end of the market, and it doesn’t charge buyer’s commission. “When I first started, a lot of my friends were moving into a place of their own and wanted a piece of art for the wall; I saw these incredible artists just starting out in their careers, and decided to bring the two together.”

The first pop-up auctions were held in London’s Shoreditch, with Instagram serving as the catalogue. Aside from a card reader and gavel, the newly formed company had no overheads except its website – which Mr Best paid for using the money he’d been saving for a motorbike.

His commitment to reinvention extended to the creation of the world’s first downloadable bidding paddle – an innovative piece of technology that’s “made everything so much more welcoming, so much more normal. It’s all done automatically once a customer’s details are input, and now serves much like a boarding pass or train ticket that can be accessed immediately on your phone.” Not having to source a bids team to allocate physical paddles helps to lower business costs, too.

There’s no doubt this business model is gaining traction: despite employing just a team of three, The Auction Collective attracts buyers from as far afield as Australia, Dubai, Singapore and the US. And the business is even collaborating with art industry giants: in December 2018, the team were thrilled to partner with the Saatchi Gallery for an exhibition and auction called Abstract: Reality; they have also been asked to speak at the Global Auction House Summit, sitting alongside Sotheby’s, Christie’s and Phillips. “At times it all feels a little surreal,” says Mr Best, laughing. “Only a couple of years ago I was begging for internships at these places, and now we’re on a panel with them.”