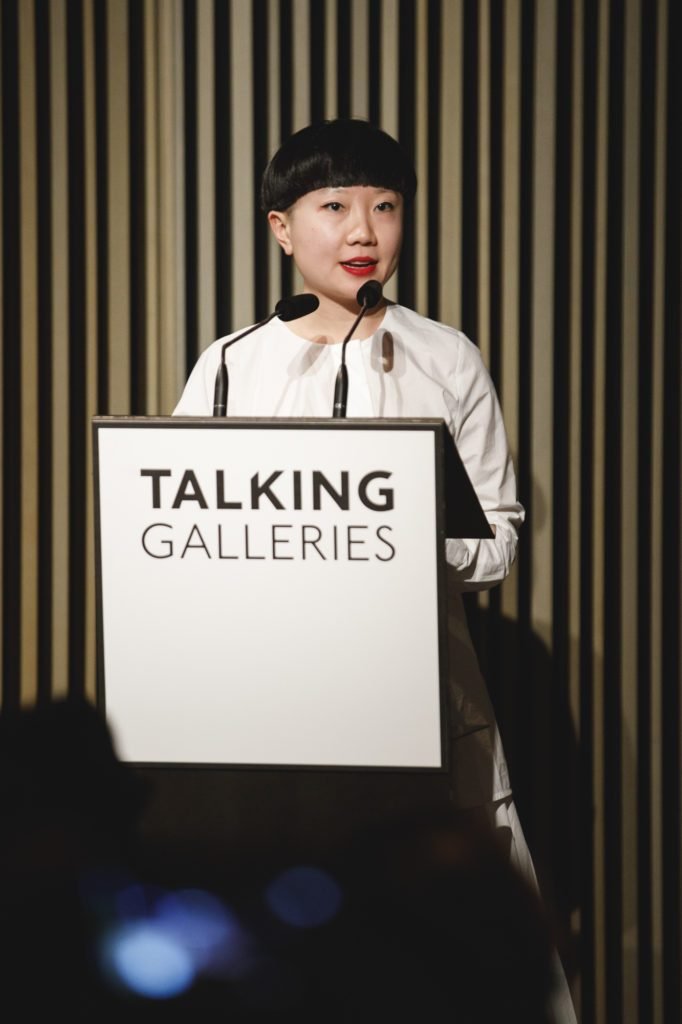 At this year’s Talking Galleries symposium in Barcelona, the debates boiled down to a few core issues.

Last week, globe-hopping gallerists, auctioneers, and art advisors converged on Barcelona for the city’s seventh annual Talking Galleries symposium, billed as a “think tank for galleries.” But unlike many art-world conferences, people didn’t just sit on stage for hours and politely agree.

But the possibilities for disruptive change ruled the proceedings, whether that change originated in technology, new business models, or shifting demographics and mindsets. And after reflecting on my time there (disclosure: I was both an audience member and a presenter), it seemed there was no better way to recap the symposium than to highlight the four most productive tensions that emerged—tensions that will undoubtedly shape the art market for years to come.

Given art dealing’s frequent (and historically accurate) portrayal as a cult of personality, the last thing you might expect a major gallerist to say in 2019 is that the key to success has been making himself unnecessary to his organization. Yet that is exactly what Perrotin did in his keynote. The Parisian gallerist recounted how a serious motorcycle accident in 2001 forced him to delegate responsibility to his key staff to a degree he would previously never have considered. He now credits his relationships with his team as being nearly on par with his relationships to his artists, because the former enables the latter. It was a striking story of a dealer gaining ground by letting go—at least, to an extent.

However, Perrotin also demonstrated how integral technology has become to his organization. In one of the symposium’s buzziest moments, he walked the audience through the custom software he uses to manage his web of six international galleries, which collectively house over 100 staff members. He explained that he first began building the software at the tender age of 18 and now employs 12 engineers to maintain and refine it. The program acts as the central nervous system of the gallery, allowing him to set deadlines and follow up on priorities with employees, as well as see all works currently on reserve to specific clients (including at what price, and at what size discount).

Later that day, Jewish Museum digital director JiaJia Fei batted away the bromide that technology will inevitably make the art market more democratic. In a presentation about social media, she noted that the world’s app usage has consolidated in a dramatic way. A few years after the art-tech bonanza led to the creation dozens of native apps, such as those produced by individual museums, the average user now spends 80 percent of their screen time on their top five apps, which are usually familiar heavy-hitters like Instagram and Twitter, as well as all-purpose “super-apps” like WeChat. In short, it’s now better for galleries to build their followings on other platforms than to try to seed their own.

More frictions emerged in a panel moderated by The Art Newspaper’s Anny Shaw on women artists in the market. In it, art-market economist Clare McAndrew previewed data on gender disparities that will be included in this year’s edition of The Art Market, the industry-wide annual report from Art Basel and UBS. Her statistics walked back most notions that the art world has made substantial progress on gender equity. Notably, she debunked the theory that the market is friendlier to women as they move up the ladder. Her findings show that, from a subset of over 60,000 artists culled from Artsy’s records,  women make up an even slimmer proportion of “established” artists (defined as those whose work has appeared at auction) than “unestablished” figures who have not yet had a work hit the auction block (16 percent women and 36 percent women, respectively).

But her data also coaxed glimmers of hope from her co-panelists. Art advisor Lisa Schiff volunteered that auction results may skew toward male artists partly because, at least based on her clientele, female collectors tend to opt out of that sales channel entirely. Carlos/Ishikawa and Condo founder Vanessa Carlos also wondered what the numbers would say about artists specifically born between 1980 and 1995, as her sense is that representation within younger demographics is “actually quite equal.” Carlos supplied the flashbulb moment of the panel, too, when she declared of the shift in attitudes among rising artists and galleries, “No one wants to hear what a straight white man has to say right now.”

Yet that statement shadowed the following session on “The State of the Art Market Today,” which brought together, you guessed it, three generations of straight white men to contextualize the trade: artist, dealer, and artnet contributor Kenny Schachter, Simon de Pury, and yours awkwardly as the moderator. The conversation pushed back on a number of popular change-based narratives, highlighted by the two panelists’ opinion that the infamous middle-market gallery crisis is at least somewhat overblown. (Perrotin—obviously, a member of the same gender and race demographic as my trio—echoed this sentiment in his keynote, where he emphasized that selling art has always been difficult.)

Still, no exchange in the session was more memorable than Schachter’s contrarian take on forgeries: “Fake art is like a fake orgasm: As long as you don’t know it’s fake, it’ll hang on your wall and make you happy.”

On day two, Joe Kennedy, co-founder of the gallery Unit London, made a controversial case for a gallery model with starkly nontraditional priorities. Guided by consumer-centric online ventures like Nike’s customize-your-own-apparel line NIKEiD and Netflix’s choose-your-own-adventure production Black Mirror: Bandersnatch, he framed Unit’s objective as “mass engagement” with a mainstream audience rather than the traditional exclusivity-driven sales model.

Despite growing from a 2013 pop-up in West London to a physical space in Mayfair that regularly hosts exhibitions, Unit also positions itself as a “content creator” and “an agency based on storytelling” rather than a traditional exhibitor and seller.

Yet this charcuterie tray of Big Tech buzzwords brought a few knives out of the audience. Multiple attendees challenged Kennedy in the Q&A session following his talk, none more directly than Elizabeth Dee. After starting in with the unvarnished question, “What’s your endgame?” she pivoted to asking how Kennedy and his co-founder protect their artists from the throng of consumers they moved to the center of their model.

Kennedy insisted that Unit’s artists were still highly respected and well managed, albeit in a slightly different structure than the norm. Left unresolved at the exchange’s end were age-old (yet perhaps newly urgent) questions about how wide a reach the traditionally insular art market can have, and how interested those on the inside care to stretch themselves to find out.

Finally, a panel discussion on the burgeoning market for African contemporary art offset exciting advances with important caveats. Peter Gerdman of the analytics firm ArtTactic began by framing the story with auction results. On one hand, the worldwide market for African contemporary art has shown dramatic growth (in relative terms), climbing from roughly $21 million in 2016 to between $35 million and $40 million in each of the next two years.

Also on the positive side: three of the top five African artists by total auction sales are living women—Njideka Akunyili Crosby, Marlene Dumas, and Julie Mehretu—whereas the same rankings in both the US and UK are, for all intents and purposes, a men’s locker room.

However, some of Gerdman’s other data points complicate these feel-good stories. Overall, African male artists still outsold their female counterparts in two of the last three years (2016 and 2018), while the global share of auction sales for all African artists still only roughly equals that of Romanian artists. (For context, Gerdman reminded attendees that recent market phenom Adrian Ghenie props up the latter group.)

Auctions aside, though, this particular niche offers genuine reasons for optimism. Touria El Glaoui, the founder of 1:54 Contemporary African Art Fair, emphasized her commitment to sustainably expanding the market by cultivating a homegrown collector base, keeping the fair’s size approachable—the largest edition so far comprised just 43 galleries—and giving space to nonprofit enterprises like Dak’Art, the Biennale of Dakar. Lerato Bereng, associate director of Johannesburg’s Stevenson Gallery, tried to temper expectations for meteoric growth by explaining that Africa is still, in very real ways, building its art-market infrastructure from the ground up right now.

Their freedom from the creaking status quo suggests that, in the years ahead, we in more established art markets might do well to pay as close attention to their business decisions as to their artists.Follow artnet News on Facebook:

Want to stay ahead of the art world? Subscribe to our newsletter to get the breaking news, eye-opening interviews, and incisive critical takes that drive the conversation forward.