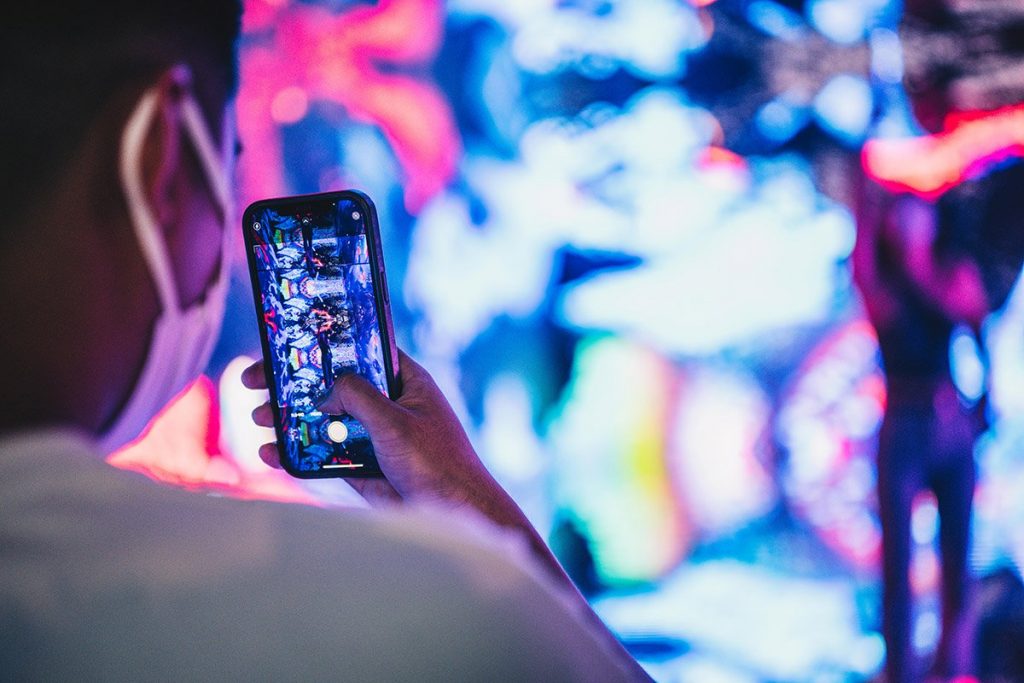 This month, Hong Kong welcomed the first iteration of Digital Art Fair Asia(DAFA), a new platform dedicated to showcasing digital art—from photography and augmented reality to immersive, experiential art, non-fungible tokens (NFTs), and more—in an attempt to close the gap between the physical and the virtual. Held in Central in the former location of fashion retail giant Topshop, the event has sparked curiosity and discussion among art enthusiasts, tech followers, and just about anybody who has heard of NFT. Tickets purportedly sold out before the fair opened, and just days in, the fair duration was extended to accommodate for the high demand.

The polarity in opinion on the fair within the Hong Kong art scene is wide, igniting both high praise and sharp criticism. Never have I seen the art market more divided (and I am often caught in the centre of heated debates). In fact, I believe soon we will see a new volume of tech industry jargon adding to the already ridiculously exhaustive vocabulary we use to talk about art. But for now, NFTs are a disruptor that has upended the art world so fast that we have yet to catch up—something made significantly harder because of the rapid pace by which the crypto space operates.

Having mulled on this development for some time, casting heavy doubts and holding tight to scepticism on the entire NFT phenomenon, I think there are at least three points of discussion worth keeping in mind to help us formulate a rounded opinion, and DAFA, while certainly not perfect in its execution and presentation in its inaugural iteration, has helped raise these topics to our attention.

The Hiscox Online Art Trade Report 2021, published in September, reported that US$3.5 billion of NFT art and collectibles have so far been sold in 2021—owing largely to a sharp rise in August which saw US$1.7 billion in sales, of which the mega trendy CryptoPunks and Bored Ape Yacht Club NFTS contributed US$680 million and US$297 million, respectively.

What this data represents, and surge in popularity for algorithmic (art) collectibles demonstrates, is that within shifting interests of collecting on a whole, the appeal to be part of a virtual community is becoming more desirable than owning an individual work of art. What even constitutes art is being debated, but ask any traditionalist in the art field and I guarantee they will likely agree that a Bored Ape is not art nor support how such a JPEG illustration could be worth the monetary value it is currently perceived to hold.

But lest you forget, the crypto market is one of extreme volatility. The Hiscox report noted that September subsequently saw a decline of 69% from the previous month—a potent reminder just how fast the NFT market is fluctuating.

NFTs Contribute to Opportunities for Artists

“Technology and NFT has really given the artist a way to tell their own stories, give their own experience and share and be part of a community in a way that traditional galleries probably wouldn’t do,” says Gillian Howard, co-founder and director of DAFA.

This is certainly circulating to be one of the most pivotal reasons I’ve heard for advocating NFTs in the art world. That NFT may offer a path towards decentralisation of the traditional art market power structures is understandably a very attractive and utopian idea. As Derry Ainsworth, artist and curatorial director of DAFA, sums it up: “It breaks down the hierarchy of having to know someone who knows someone who knows someone to get into an art show.” A chance for artists wanting to create, share and sell their art by means that let them feel empowered could never be criticised as a bad thing when it is long known that the number of active artists exceed what the gallery infrastructure can support.  The argument is further strengthened by the idea that NFT marketplaces allow artists to take a larger slice of profit as well, and the chance for royalties should their work trade hands. “It’s great to actually receive your true value. Hopefully it can be a platform for artists to make a real living and get what they deserve for their work, which I think is great,” says Ainsworth.

Whether this financial model can truly be so simple yet beneficial is, in my opinion, highly doubtful. However, after various discussions with artists taking part in DAFA, it does appear that on the whole, dipping their toes into NFT has given these creatives new opportunities, increased collector interest and commissions—something we can view as a positive consequence at least.

The Present is Digital, The Future is Virtual

Cynicism, rejection and disbelief are repeatedly experienced in art history. When Impressionism first came to light, the Paris salons discredited it. When photography was first invented, the medium was not relegated as art. Conceptual Art saw its fair share of haters and Abstract Art is not without its critics. Hardly ever is the art of our time accepted in our time, but only retrospectively. Let’s face it, we average humans are not built to easily accept what is challenging to our core beliefs—unless, maybe, you are an artist. So what happens if we were to think about digital art—crypto art included—as the art movement of our time? What if it were to be classified as a proper noun in art history studies, becoming “Digital Art”? While the traditionalist in me finds this a difficult pill to swallow, I admittedly do agree with Howard who says she believes, “In the future, art will be consumed in the Metaverse.”

“I think it’s only going to get bigger, and we’re starting to see a shift in the way that people collect art. So I think we’re only just at the beginning to be honest,” says Ainsworth, sharing similar sentiments. “I see the future of art going into a digital space further than it already is. I think the Metaverse is going to become more apparent to everyone. Everyone’s going to consume art in a virtual space. And I think the way that you engage with this Metaverse is going to change and be more accessible. I think the technology is going to get better and smaller. And these things will become a regular part of the daily life, the same way a phone is now.”

The Metaverse may be a seemingly far-fetched concept to grasp right now, but as we see virtual reality technology improving, becoming more accessible and affordable, maybe those embracing digital art now are simply the avant-gardes of our time.

While the inaugural edition of DAFA did not present an impeccable experience and indubitably there is much room for improvement in future iterations, the fair bravely challenges our comfort zone on how we perceive and value art, and whether we are ready to accept the fast accelerating changing culture of our time. I still do not believe cryptocurrency will overtake fiat currency by any means, yet I can no longer deny the overwhelming argument that we are increasingly moving towards a digitally-led art world.