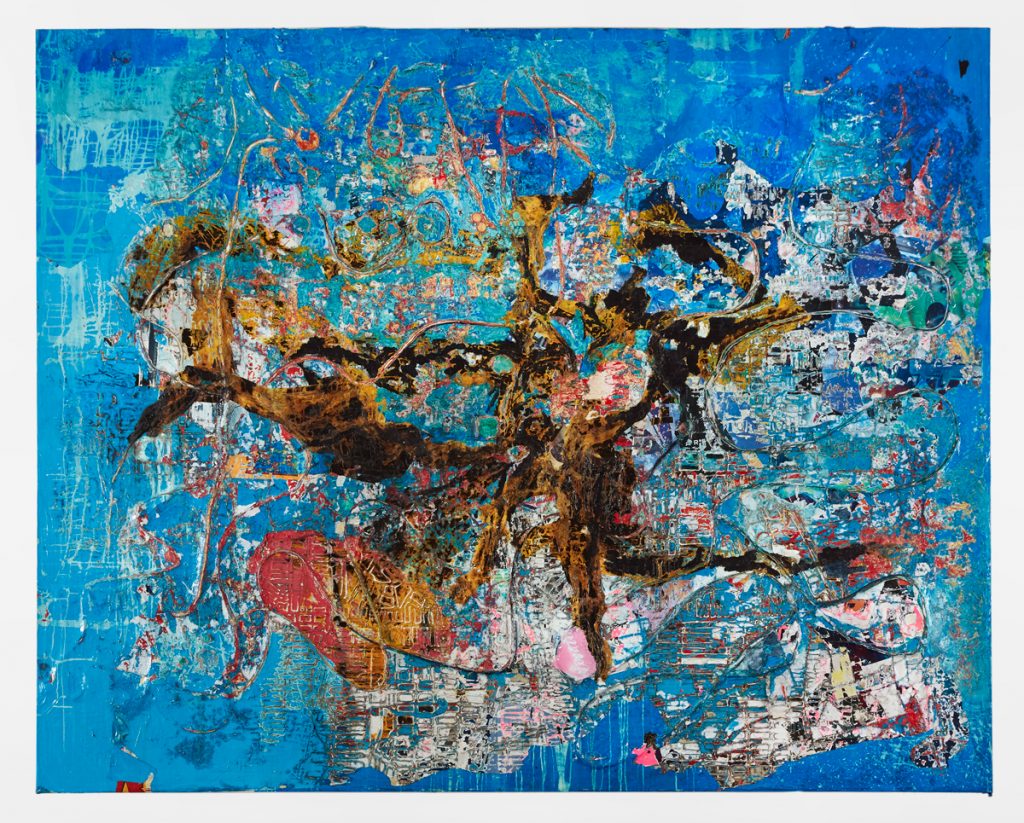 In early February, when the coronavirus pandemic forced the cancelation of Art Basel Hong Kong, it still seemed likely that the fair would be able to mount its 50th-anniversary Swiss edition, which was due to open this month. Then, as the severity of the pandemic became clear, Art Basel postponed the Swiss fair to September and ultimately canceled it altogether. Its replacement was a digital fair, which opened this morning for the first of two VIP preview days.

Following the virtual iterations staged with Art Basel Hong Kong and Frieze New York, the art market has largely acclimated to the swift move online, especially when it comes to offering high-value works to remote buyers. During the first day, dealers reported numerous big sales at the virtual Art Basel fair, which runs through June 26, indicating that galleries’ investments in building out their online offerings have paid off.

“There’s no substitute for being at Art Basel in Switzerland, the art world’s largest energy charging station,” Iwan Wirth, Hauser & Wirth’s president, said in an email. “These digital fireworks have been a great success.”

Hauser & Wirth reported that it sold 20 works across its two digital presentations, on the Art Basel website and the gallery’s own website. Several works sold are by Black artists on its roster. Mark Bradford’s 2020 mixed-media-on-canvas work The Press of Democracy sold for $5 million to a “highly respected collection.” A 1972 abstract painting by Ed Clark sold for $1.2 million, well above the artist’s auction record of $495,000 set in November 2019 at an afternoon sale at Christie’s.

David Zwirner, which became the first gallery to have an online sales platform in 2017, sold 10 of the 15 works it had on offer, totaling $10 million in sales. The highest-priced of these were Kerry James Marshall’s 2015 painting Untitled (Blot), which was bought by an American museum for $3 million; Joan Mitchell’s 1991 Pastel, which was bought for more than $1 million; and Josef Albers’s City (1928/36), which was bought for $1 million. As part of its digital initiatives the gallery had also again created “Basel Online: 15 Rooms” on its own digital platform, which gave an in-depth look at each of the works on offer and how they relate to each artist’s practice. As part of its separate “Studio” online series, the gallery sold Jeff Koons’s Balloon Venus Lespugue (Red), from 2013–19, for $8 million, which David Zwirner said was a record for an online sale of a single work by a gallery.

Elena Soboleva, David Zwirner’s director of online sales, said that when the gallery began “Basel Online” as a parallel presentation to the in-person fair last year it “in a vastly different landscape” and characterized sales as “robust.” She added, “It’s thrilling to see so much industry adoption that has happened within one year, both by necessity and design. Online viewing rooms are a new norm, and even when physical fairs resume, online presentations will surely be a critical part of the experience.”

At Art Basel, top dealers bring out their most highly valuable wares, knowing that they can easily find buyers. Works valued at tens of millions of dollars are not uncommon sights at the Swiss fair, and while no works in the viewing rooms were visible as priced above the $10 million mark, dealers said they were still bringing the best that they had to offer.

“Art Basel continues to be the leading fair in the world, and we certainly feel that caliber translated online,” Soboleva said.

Alison McDonald, Gagosian’s senior director of publications, agreed, noting that for high-caliber works “when collectors are offered works that they desire, we’ve found that they are just as willing to buy online as they would be in person.” Gagosian, who has been offering top works online since 2018, staged its sales on both the Art Basel platform, as well as its main viewing room through the gallery website.

In an email, Andy Avini, a senior director at Gagosian, said that the gallery “worked to create a balance between the two platforms. The cycles on our Gagosian.com platform are highly curated and were assembled in the same manner as our past physical booths, while our presentation on the Art Basel website has a greater variety in price points.”

Across both online platforms, Gagosian’s top sales included Jia Aili’s canvas-and-glass work Mountain and Line (2020), for $350,000, and a Mary Weatherford abstract painting with neon elements, for $310,000. Those paintings were featured alongside a work on paper by Ed Ruscha from 2020, which found a buyer for $95,000, and Sarah Sze’s mixed media work Still Dusk, which sold for $85,000. An untitled painting by Katharina Grosse, who was the subject of a solo showcase at Gagosian’s recent Frieze virtual booth, sold for €195,000 ($219,066), and a Jennifer Guidi sand and acrylic painting made this year went for $65,000.

Lévy Gorvy had several high-priced works on offer, and found buyers for 14 of them ranging in prices between $90,000 and $2.5 million. In the first hours of the fair, the gallery had already sold a 2013 Pierre Soulages black painting, a 2018 mirror painting by Michelangelo Pistoletto, a 2003 abstraction by Pat Steir, and a 2004 painting by Mickalene Thomas. Other works on offer included a 2017 George Condo for $1.5 million, a Robert Indiana “Love” sculpture for $1.9 million, a five-panel painting with nails from 2000 by Günther Uecker for $3.5 million, and an early 1960s Martial Raysse for $1.3 million.

Pace Gallery, which did not confirm its first-day sales at press time, staged a showing of large-scale sculptures by its list of mainstays, including Alexander Calder’s 1976 Mountain (1:5 intermediate maquette), priced at over $1 million, and Mary Corse’s glass and stainless-steel outdoor sculpture from 2019, for $1.2 million. Another sculpture by Jean Dubufett carrying a price tag of $2.8 million was on offer, alongside a Louise Nevelson monumental black steel work made between 1976-80 with a value of $4 million. Many of these works are monumental, and a spokesperson for the gallery said the online format is conducive to “spotlighting works of this scale would normally be impossible within the confines of the art fair booth.”

Some dealers said it was too soon to tell whether these online viewing rooms delivered greater success than the Hong Kong ones, but this edition had something the other did not: a video component offering close-ups of the works and artist interviews. “In terms of the digital platform itself, we have found that video content is essential,” Rachel Lehmann, cofounder of Lehamnn Maupin, said. “We want to avoid a flattening effect online, and incorporating video brings the works to life.”

For its booth, Lehmann Maupin put together a tightly curated affair, titled “Throughline,” that focused on the work of five artists—Gilbert & George, Liu Wei, Angel Otero, Do Ho Suh, and Cecilia Vicuña—pairing a new work with a historical work. Vicuña’s 1978 painting Camilo Torres, which depicts the Colombian socialist and Roman Catholic priest who was killed in 1966 and became a martyr for the country’s guerrilla movement, sold within the first hour to a Korean collector for $375,000. It will be included in the upcoming edition of the Gwangju Biennale, set to open in February 2021. “The sale occurred immediately as the fair opened and proves that there is an appetite for and an increasing comfort level with transacting online,” Lehmann said.

Tribeca’s Canada gallery reported a strong set of placements for work by its emerging artists, with a painting by Matt Connors going for $70,000, and one by Xylor Jane titled Supersedure (Space Invaders II), from 2020, that went for $40,000. There was also a painting by Katherine Bradford that sold for $18,000 and a painting by Marc Hundley that was bought for $14,000.

Dealers also spoke highly of Zoom sessions taking place alongside the online viewing rooms that feature artists with work on offer. New York’s Alexander Gray Associates had dedicated its booth to the work of Afro-Cuban artist Ricardo Brey. Several works by the artist sold, including the sculpture Admission(2019) for $50,000. Nichole Caruso, a director at the gallery, said a VIP tour allowed him to connect directly with collectors via Zoom. “It’s the best available proxy for the organic, in-person engagement we would’ve otherwise experienced at the physical fair,” he said.

Edward Tyler Nahem, who owns a namesake gallery in New York, said, “This format mimics the usual interactions we’d be having right now in Basel. At the same time, we have been able to allocate more live and calm time with clients on this platform, compared with the often-frenetic hours of the actual live fair.”

“We have traditionally relied on our audiences and collectors having the intimate and personal experience of visiting us at the gallery or at an art fair,” Nahem said. “Instead, among other lessons being learned, the pandemic has shown us that the art world needs to catch up with the digital innovations so many other sectors have to a variable degree already embraced. Beyond this, however, I don’t see this as a time to rush to shift everything online.”