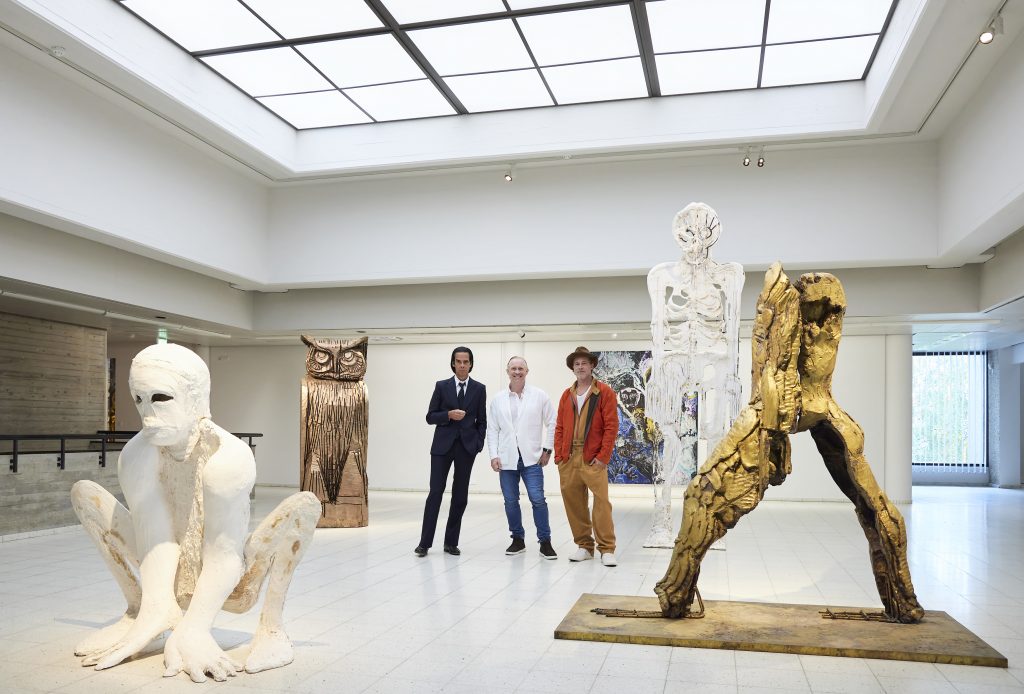 Brad Pitt Shows His Art in a Museum for the First Time With Buddies Thomas Houseago and Nick Cave
The exhibition runs through January 15, 2023 at the Sara Hildén Art Museum in Tampere, Finland.
Dorian Batycka, September 19, 2022

Nick Cave, Thomas Houseago and Brad Pitt in their collaborative exhibition at the Sara Hildé Art Museum in Finland. Photo: Jussi Koivunen.
Celebrity art-making seems to be all the rage these. Whether it’s the rapper Skepta’s recent foray into painting, or the actor Robert Pattison’s curatorial debut, the art world seems keen on welcoming star power into its ranks.

The trend has been taken to another level—the A-list to be exact—in a new exhibition of work by the artist Thomas Houseago, which opened September 18 at the Sara Hildén Art Museum in Finland. Alongside new paintings and sculptures by Houseago, the show features ceramic artworks made by the musician Nick Cave, and sculptures by actor Brad Pitt, both of whom were invited by Houseago to respond to themes of nature, cosmic unity and the cycle of life.

According to the museum, the artist described the collaboration as “an impactful move away from the ego-driven modes of thinking to a profound realization that ‘I am not an I. I’m a WE!’” A photo of the trio at the exhibition opening shows them surrounded by several sculptures and a painting.

And while Cave and Pitt have achieved world renown in their artistic disciplines of music and drama respectively, it is the first time either of them have exhibited their art in a museum.

Pitt produced a total of nine works for the show, ranging from a large-scale, bronze, coffin-shaped sculpture, to smaller works such as a miniature house made out of tree bark and held together with tape. A large work entitled Aiming at You I saw Me But It Was Too Late This Time (2020) shows a violent shooting, while another work has bullets trapped in silicone.

Cave is presenting a series of glazed ceramic sculptures depicting the life of the Devil (perhaps a symbolic alter-ego for the brooding musician?) in 17 scenes, “from innocence through experience into confrontation of our mortality,” according to the museum. Made by Cave between 2020 and 2022, with the help of London artist Corin Johnson, “aesthetically the series nods to the artist’s interest in Victorian Staffordshire Flatback figurines, of which he is a collector,” the museum said in a statement.

Houseago’s works, such as Vision Painting II – Soul Visit – Dead Self & Before Birth (2020) and Psychedelic Construction Masks (2020), examine the state of ego-death associated with creativity. The British-born L.A.-based artist often works with figurative sculpture. In 2010, his large plaster, Baby, was featured in the Whitney Biennial.

“WE is an open-ended concept that encourages new ways to think about art-making and the role of the solitary artist, which are less about ideas born exclusively to a single author,” the museum said in a a statement.

“Thomas Houseago—WE with Nick Cave and Brad Pitt,” runs through January 15, 2023 at the Sara Hildén Art Museum in Tampere, Finland.