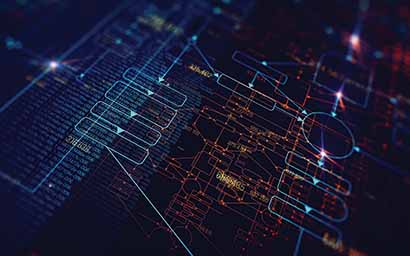 Nicholas Pratt looks at the launch of two blockchain-based services for fund distribution, registration and settlement, and their implications for the industry.

Like the anticipation for a London bus, you wait months for a new funds distribution network based on distributed ledger technology (DLT) and then two come along at once.

In May, Calastone went live with its blockchain-powered Distributed Market Infrastructure (DMI) after a two-year-long period of testing the clearing and settlement of funds. According to Calastone, 1,800 customers across 41 countries and territories have migrated to the network, which it says makes it the largest blockchain connecting financial organisations in the world.

Meanwhile, at the end of April, FNZ launched ChainClear, which it describes as “the first production blockchain ecosystem for the asset management industry”. It has been developed in partnership with a consortium of fund managers that includes Aberdeen Standard, Kames Capital, Legg Mason and Merian Global Investors.

“We are running daily market transactions for a number of FNZ platform customers and FNZ Transfer Agency customers with others progressively going live,” says Phil Goffin, head of innovation at FNZ.

Both ChainClear and DMI operate in a similar manner and have a similar objective. The former is using DLT to replace the thousands of copies of transactions and holdings with “a single, secure, verifiable source of truth, universally accessible by all parties”.

As Goffin says: “The global fund industry today relies on a plethora of peer-to-peer connections between investors, managers and platforms to effect basic fund activities such as trading, settlement, transfers, distributions and reconciliations.

“None of these transactions are synchronised in real-time. Everyone has a different view of ‘the truth’ that often persists for days and months, leading to errors and exceptions, high back-office costs and risk for all participants.”

Calastone, meanwhile, has described DMI as a “major step in enabling digitisation and friction-free trading [in the funds industry] at a significant global scale” that will reduce costs while producing better risk controls and more operational efficiency.

Calastone has forecast that there could be more than £3.4 billion (€3.8 billion) in savings per year made through what its chief innovation officer Campbell Brierley says is the “technological mutualisation of the distribution model”.

By enabling real-time trading and settlement and servicing of funds, the DMI will help to take out costs and reduce fragmentation. “Information now ripples instantly across the market, a step change from the previous, fragmented model,” says Brierley.

“Financial services firms worldwide can, via the DMI, utilise new services, enhanced capabilities and new investment opportunities, allowing them to evolve their proposition to one that will be more competitive and valuable long-term,” he says.

New services include a ‘sub-register’ that creates a shared, real-time view and history of the registers between trading partners at any point in the distribution chain.

The respective launches represent significant progress in terms of using DLT, to go from the proof-of-concept stage to going live. There are other similar ventures that have passed certain milestones. For example, back in February, Credit Suisse Fund Services, the Swiss bank’s fund administration business, processed its first end-to-end fund transaction on a blockchain platform: namely FundsDLT, backed by the Luxembourg Stock Exchange’s funds market infrastructure Fundsquare.

Up against it
However, other funds-focused DLT projects have had problems. Iznes, a record-keeping platform for funds, is based on the Setl platform, which uses a permissioned ledger, allowing a network of trusted partners to see transaction details. In March, though, Setl was forced into administration after it was unable to maintain the regulatory capital needed to sustain both the Iznes business as well as ID2S, a central securities depositary based on the same technology platform. Setl has since re-emerged following a management buyout of the group’s main assets, although it has sold its stakes in the Iznes business.

Participants in the funds market will want to know how likely it is that any new blockchain platform will survive in the long term. Will all the different platforms compete with each other or will they be interoperable and complementary? And most significantly, will the success of any of these blockchain networks and platforms lead to incumbent services or industries becoming redundant – such as transfer agents, for example?

Both FNZ and Calastone are diplomatic about the disruption of incumbents and the competition between the new platforms. “We interoperate with the existing market players and infrastructure and will continue to do so,” says Goffin.

“Our key focus is on moving the market to a delivery versus payment settlement model and introducing asset tokenisation in collective investments, which paves the way for new fund products that are designed in a digital economy, versus the traditional analogue structures that have historically been created.”

Goffin also takes the view that “involving the entire industry, including competitors and non-FNZ-powered platforms, into the market infrastructure is important in order for the whole funds industry to advance with innovations to better serve investors”.

He mentions work done with UK trade body the Investment Association on asset tokenisation and governance on the market infrastructure, which he says will “allow all parties to benefit from our spearheading these initiatives”.

Goffin also notes that ChainClear is designed to be interoperable with existing services and infrastructure to minimise or eliminate any additional overheads for those using other solutions. “We intend to be complementary where it benefits the entire market,” he says.

But he stops short of suggesting the industry would be better served by a single, dominant, blockchain-based platform that acts as a utility rather than multiple offerings. “We believe that competition is important to drive innovation and further reduce costs,” he says.

Calastone, meanwhile, says that there has been no interest to date from clients wishing to connect to any third-party DLT platforms. “To date, clients have been more focused on taking advantage of the world’s largest DLT-enabled funds marketplace and we are committed to delivering real benefits to their businesses now,” says Vince Lucey, head of product at Calastone.

But, he adds, the wider investment into DLT for funds and other financial markets is positive and shows that this technology is starting to be taken seriously across the wider market.

On the issue of whether the market would be better served by a single blockchain-powered market infrastructure that acts like a utility, Lucey says that a shared, mutualised infrastructure across funds has the capacity to save the industry £3.4 billion per year.

“We believe the industry will come together over time, as experience of this technology grows, to discover how this can be achieved to generate the best result for the all participants,” he says.

“This issue has come up many times across financial services, and it depends on what the industry decides is the most effective long-term option. Through the unique combination of a global presence, large client base and the simplicity of the DLT framework, the DMI gives the industry the opportunity to mutualise data and processes not achievable before.”

Posted in Alternative investment, Art fund, art portfolio, hedge fund
← Art investment is no longer the domain of eccentric art aficionados or connoisseurs of fine art. Nowadays, it’s easier than ever to use it as a way to diversify investments.«Interest in the issue of tokenized securities is increasing» →