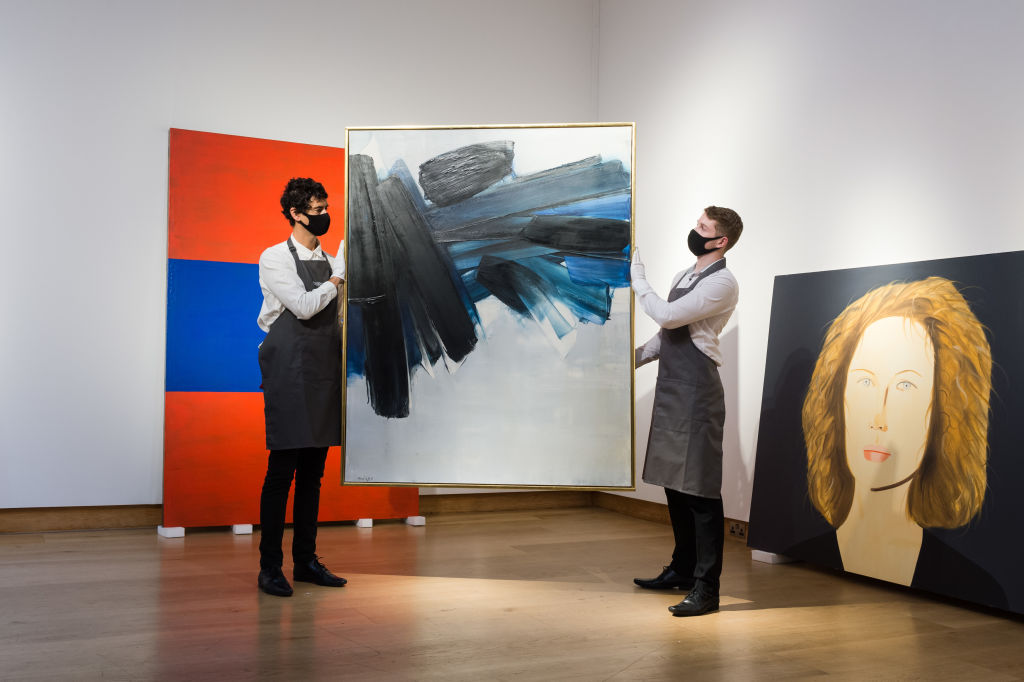 Auction veteran Simon de Pury on how galleries could crack down on art flippers by challenging auction houses on their own turf.

Every month in The Hammer, art-industry veteran Simon de Pury lifts the curtain on his life as the ultimate art-world insider, his brushes with celebrity, and his invaluable insight into the inner workings of the art market.

There has always been a healthy rivalry between the primary market and the secondary market, and between the biggest art fairs and the main auction businesses. The galleries had their big rituals in Art Basel in Switzerland, Miami, and Hong Kong, whereas the auction houses celebrated their major masses during the auction weeks in May and November. As long as I have been active in the art market, which means for a very long time, there has been a perpetual discussion about whether it is better to sell at auction or privately through a dealer.

You could of course always argue it either way. Over the years, I have acted both as a dealer and as an auctioneer. It is a question of temperament, but personally, I have always preferred selling at auction. All too often as a dealer I would offer an artwork at a price (which was calculated by analyzing recent auction sales of comparable works) only to be told by the prospective buyer that my asking price was way too expensive.

If the exact same work was subsequently offered at auction, I was often amazed to see that the exact same buyer would acquire it and thereby bid way beyond my original asking price, which they had previously viewed as being outrageously high. At auction, the collector knows that if she or he doesn’t make up their mind, the painting or sculpture is gone, and probably for a very long time. Seeing or hearing other people bidding against them also reassures them. One major collector recently told me that unless there are at least three people bidding against him, he is not motivated to go the full distance.

During the early 1990s, I remember encouraging a new collector to bid on a wonderful Matisse at Sotheby’s in London. This was after the market boom of the late 1980s that had been fuelled by Japanese buyers, when things were relatively quiet. My collector got his Matisse with very little competition and had to pay far less for it than what he had been prepared to spend. When I called to congratulate him after the auction, he was very upset and told me that he had expected more action “for his buck.” This illustrates the two very different psychologies that are at work in the case of a private sale and a public auction.

Despite the international duopoly of Sotheby’s and Christie’s that has existed since the late 1950s, the business model of auctions has proven to be difficult. The global success of the two main houses came with massive overheads and little profitability. It used to be very costly to organize auctions as it required a huge infrastructure around the world. The main costs were staff and the printing and distribution of catalogues. Since the 1980s, the major auction companies have had to increase their buyer’s premiums at regular intervals in order to support the business.

In contrast, a successful dealer would have hardly any overheads and maximum profitability. It is for this reason that during the 1990s, both Sotheby’s and Christie’s started encouraging their specialists to do private sales. The auction companies were well equipped to do so since they already had extensive client data, including the identities of the buyers and the underbidders, and exactly what they were interested in.

This strategy paid off, and it is actually private sales that have allowed auction houses to maintain a decent profitability. According to Art Basel’s 2020 art market report, private sales accounted for 17 percent of Sotheby’s total revenue, or $990 million, in 2019. In 2020, Christie’s reported that it sold more works worth over $25 million privately than publicly, and both main auction houses reported record highs for private sales. Needless to say, auction houses have over the years become some of the world’s leading private dealers.

After all, big galleries such as Gagosian, Hauser & Wirth, David Zwirner, and White Cube represent the vast majority of living artists whose work is being sold in the contemporary auctions of Christie’s, Sotheby’s, and Phillips.

When a red-hot artist has an exhibition in a gallery, the asking prices are the same for works of the same size despite the fact that the quality can vary widely. More often than not, collectors do not get to choose the works they like the most, but rather the gallery chooses the “lucky” collectors for strategic reasons. If you have 30 works and a list of 100 collectors who would like to buy one, there will be 70 collectors who go away disappointed. This outstanding demand will, inevitably, encourage some of the “serious” collectors who were chosen by the gallery to put their recent acquisitions up for auction. This explains big spikes in prices that can happen very quickly.

The artists themselves do not financially benefit directly from these sometimes-substantial upsides. But they could—if their galleries opted to sell a portion of their new works at auction. This unorthodox approach would also reduce speculation since the prices obtained when these works appeared on the market for the first time would already be a true reflection of the demand at that particular moment. The client database of the major galleries is as good as those of the auction houses, so they would be just as well equipped to obtain world record prices for the artists they represent.

Thanks to the pandemic, the cost of organizing such auctions has decreased significantly. Lavish catalogues are a thing of the past and huge infrastructures have diminished. The salespeople at galleries know their clients just as well as the ones employed by auction houses.

What’s more, the entry requirements for holding auctions are far less onerous than what they used to be. Loic Gouzer, former rainmaker at Christie’s, has demonstrated as much with his app, Fair Warning. He selects on average one work per week to sell at an auction on the app. His costs must be minimal enough to allow him to have a competitive buyers’ premium, which, at 15 percent, is much lower than what the main houses are charging. Further comparable initiatives are expected to start over the coming months.

The consequence of the major auction houses no longer coordinating the auction calendar between themselves and no longer printing big catalogues is that the deadlines have shortened considerably. You can consign a multimillion-dollar lot up to one month before the sale, whereas previously the lead times were at least three months. As a result of this shift, the art market is likely to become far less seasonal and will move more and more toward a 24/7 market.

Posted in Fine Art
← What I Buy and Why: Actress and Model Nichole Galicia on the Stroke of Luck That Got Her Hooked on Collecting Art—as a TeenagerArt market outlook 2021: Agata Becker →