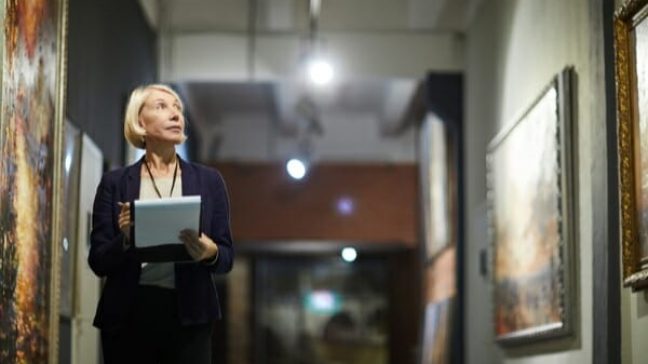 Before you learn how to invest in art, you need to understand the opportunities presented by art to discerning investors.

Andy Warhol famously said that making money is art. While this statement is profoundly true, the opposite is also exceedingly relevant these days. Art makes for an aesthetically pleasing and beautiful investment strategy.

According to the Deloitte Art and Finance Report 2017, 88% of wealth managers advised apportioning a part of their investment portfolio towards art.

Art investment is no longer the domain of eccentric Warhol aficionados or connoisseurs of fine art. Instead, it is now seen as a serious mainstream strategy to diversify investment.

The Wall Street Journal declared art to be the best investment class in 2018. The art market performed far better than other markets during 2018, as evidenced by the numbers. Blue-chip artwork posted an average gain of 10.6%, whereas the S&P 500 securities fell by 5.1% on average during the same period. What makes this feat remarkable is that 2018 was an exceedingly difficult year during which several markets declined, including gold.

How resilient is high-end art as compared to stocks? What are the prior precedents to gauge its tenacity in the face of catastrophic economic collapses? The 2008 financial recession will serve as a suitable case study.

While the financial markets plummeted in 2007 and 2008, the art market touched new heights. During 2005, approximately $630 million were spent in the high-end art market for paintings worth over $5 million–termed “masterpieces” for convenience. During the economic recession of 2007-2008, the demand for masterpieces shot to an incredible $2.2 billion. Money flowing into arts had almost quadrupled during one of the toughest financial downturns in history.

The art market then cooled considerably when stock prices stabilized. In 2009, masterpiece sales fell to just $625 million. This brought the high-end art market at par with the 2005 conditions.

And how did the financial market fare during this period? Stocks fell to the trading levels of the early ’90s–a staggering setback. Therefore, the art market displayed enduring resilience during highly austere circumstances.

How has the high-end art market performed since then? The rebound has been spectacular.

By 2015, the masterpiece art market burgeoned to an unprecedented $4.2 billion. It had reached almost twice its previous 2008-record value. The results for other art market segments and collectibles have been relatively mixed so far. But one thing is for sure. Elite art is in a league of its own with market performance.

There is no better investment class than the masterpiece market. Art has distinguished itself as a relatively safe and lucrative haven for investment. Affluent patrons have staunchly championed the Blue-chip art market over the years, which is one of the primary factors behind its growth. With such resolute support and sustained enthusiasm from ultra-high-net-worth individuals, it appears unlikely that the demand for art will drop in the long term.

How much of your investment portfolio should be dedicated to fine art? Professor Michael Moses states that, depending on your risk tolerance, a fair proportion would be in the range between 10% to 20%. Besides enhancing your portfolio, this can mitigate risks.

Many people commit the mistake of relying solely on their gut feeling to make investment decisions in art. Your own preferences and intuitions do not guarantee success. Thinking that other people will identify with and share your sentiments is an all too common blunder. Although art relies heavily on intuition and personal judgment, the same does not hold true for investing in art pieces.

Take into account the factors mentioned, such as rarity, due diligence, and research. Immerse yourself in the art community to understand the zeitgeist.

Also, be wary of the risks involved in arts. Remember that art is a highly illiquid medium. It is not uncommon to face a shortage of buyers for art collectibles, especially if you made the wrong choices.

Don’t presume that everything connected to art will accrue value. Also, be wise and diversify your art investments just as you would diversify any other investment. Make a selection of the most promising and talented artists and monitor their progress. Divide your investments across the brightest prospects. Hence, you can diversify your spending and mitigate risks. Don’t commit the blunder of putting all your eggs in one basket. This is important when beginning to invest in art pieces. As you grow more proficient, astute, and savvy in your judgment, you can narrow down the list of prospects.