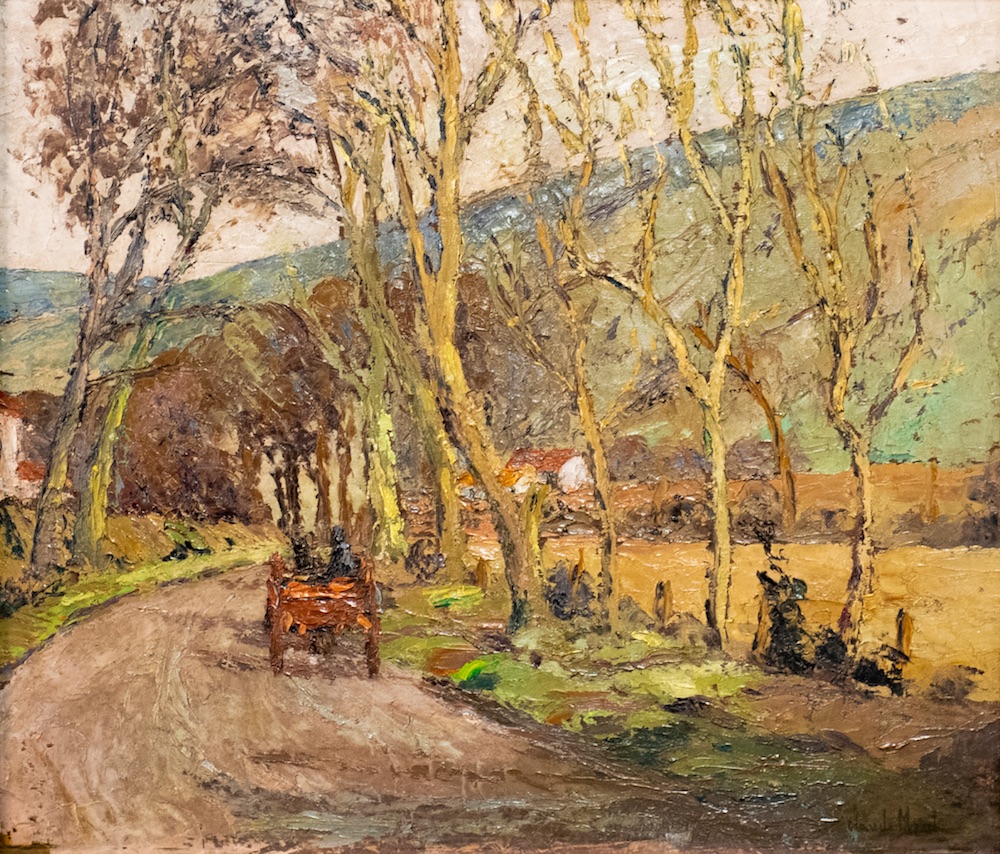 The work’s provenance can allegedly be traced from Northern Ireland to Cuba to Mexico to Miami.

Would you spend $2 million on a painting said by its seller to be by Claude Monet? What if it wasn’t included in the artist’s catalogue raisonné? Would it help if the painting came with an NFT?

That’s the question that the Miami-based Innovation Without Borders, a company calling itself a cryptocurrency consultancy, is asking the art market.

The work for sale, which is said to date from 1865, is billed as “the world’s first Impressionist NFT,” and the sale carries the promise of “piloting a new model for private clients who wish to sell their fine art outside of traditional fine art auction houses.”

The picture, titled Spring Sunshine, and its corresponding digital token will be sold on the Rarible NFT platform at a yet-to-be-specified date, and will be traded via a smart contract on the Ethereum blockchain.

But the key question for any discerning collector will be the work’s authenticity, which remains an open question.

Several Impressionist experts we consulted said that most major auction houses wouldn’t handle the work. And the Wildenstein Plattner Institute, which published Monet’s four-volume catalogue raisonné under the guidance of the late scholar and dealer Daniel Wildenstein, said it had no plans to insert the painting into future editions of the publication.

But Ariel Deschapell, a software developer, cryptocurrency consultant, and the owner of Innovation Without Borders, said the work’s owner was in possession of a letter from Daniel Wildenstein that “leaves the door open for inclusion, as they make no claim that it is inauthentic.”

“Ultimately, whether a work is included in a catalogue raisonné or not carries no definitive or authoritative guarantees of authenticity,” Deschapell added. “Catalogue[s] raisonnés in general have been subject to well-documented errors in the past, and been involved in many public controversies.”

Yet at least two high-profile catalogues raisonné scandals involved not omissions, but wrongful additions. More than a decade ago, the authentication board overseeing Andy Warhol’s work erroneously authenticated—and included in the artist’s catalogue raisonné—Brillo Box works that were posthumously created as display copies.

And at least one buyer of a forged painting, said to be Jackson Pollock and sold through the disgraced Knoedler gallery, was promised the work would be added to his catalogue raisonné, although it remains unclear if that plan was ever actually in place.

Deschapell’s primary support of the work’s authenticity is a five-page 2002 report by a Jacksonville, Florida appraiser named Ted Weeks. According to the document, the painting was in Monet’s possession from the time it was made in 1865 until 1867, when the artist allegedly “ran out of money and returned to Paris.”

By the late-1860s, according to the document, the work was either lost, abandoned, or seized by creditors and was missing for about 15 years. In the early 1900s, it is said to have turned up in a collection in Belfast, Northern Ireland, before it apparently went to a private collection in Cuba in the 1920s, passed through several hands in the country, and then supposedly went to a private collection in Mexico. It is said to have come to the Miami collector who currently owns it in 1997.

“This rediscovered study by Monet is unique for its freshness, its foretelling revolutionary artistic vision, the energy of its realization, its remarkable condition, and especially for its unexpected rediscovery,” according to the report.

A Google search for Ted Weeks and the company name on the document’s letterhead, Weeks Fine Art, turned up no immediate listings.

Deschapell, who says Weeks died some years ago, added that his client is “aware of the painting being declared to customs in the movements between Cuba, Mexico, and the United States in the ’90s. That leg of the painting’s provenance is very clear.”

Deschapell also cited additional expert testimony from a conservator and consultant named Robert Stoetzer. According to his website, Stoetzer specializes in Mayan ceramics and Pre-Columbian art.

Reached by phone in North Carolina, Stoetzer—who said he was a curator for 15 years at the University of Miami and a former conservator of Arthur Sackler’s collection—told Artnet News he first saw the painting more than 20 years ago at the request of the current owners.

“I firmly believe that it’s a Monet and that there is enough physical evidence to support that conclusion,” he said. “The unfortunate thing is that everything begins and ends with the Wildensteins. In my mind, it’s Monet, and I’m secure in giving it that attribution.”

Stoetzer said he had asked a colleague to confer with experts at the Louvre over the work. “The response he got was, they felt [it] was a Monet, but they couldn’t speak against the Wildensteins.”

All this may suggest why the seller is not working closely with a traditional auction house. But for Deschapell, that’s no liability.

“Claude Monet and the Impressionists perfectly epitomize the pioneer spirit being carried forward by today’s cypherpunks and cryptocurrency enthusiasts,” he said.

He added that his company is now “facilitating a new professional appraisal of the piece.”Follow Artnet News on Facebook:

Posted in Alternative investment, Art fund, art portfolio, Fine Art, hedge fund, Painting
← NFT Art and What it Means for Artists, Buyers and the Future of the Art MarketHere Are the 15 Most Expensive Artworks Sold at Auction Around the World in July 2021 →