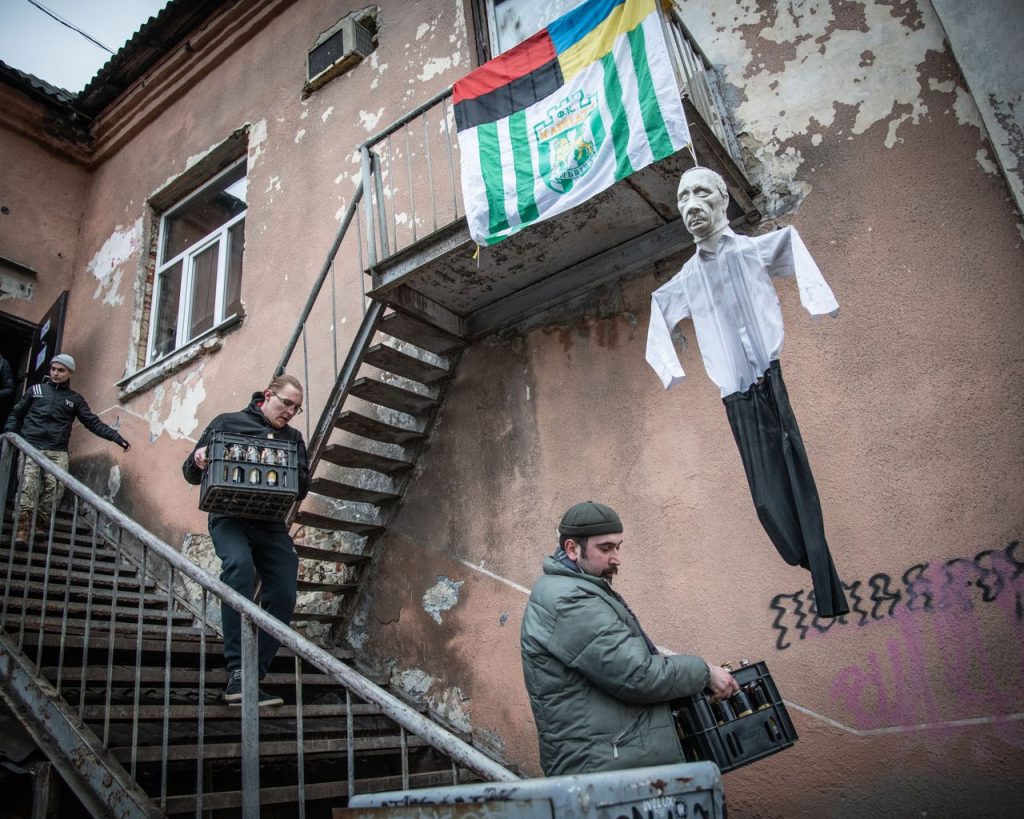 By Alan Cullison | Photographs by Justyna Mielnikiewicz/MAPS for The Wall Street JournalUpdated March 4, 2022 8:04 am ET

LVIV, Ukraine—After the fall of the Soviet Union, the blue spires and cobblestone streets of its old town made this city a hub for tourists and lovers of Austro-Hungarian architecture.

Today, the Russian onslaught on Ukraine has transformed Lviv into a fallback capital for the beleaguered government in Kyiv—and a desperate conduit for those who want to flee.

Lviv is also emerging as a supply hub for weapons and materiel that the West has ferried into Ukraine in hopes of stopping the Russian onslaught. That has raised some worries that it could be a target of Russia, which has warned the West that its aid to Ukraine could lead to war. 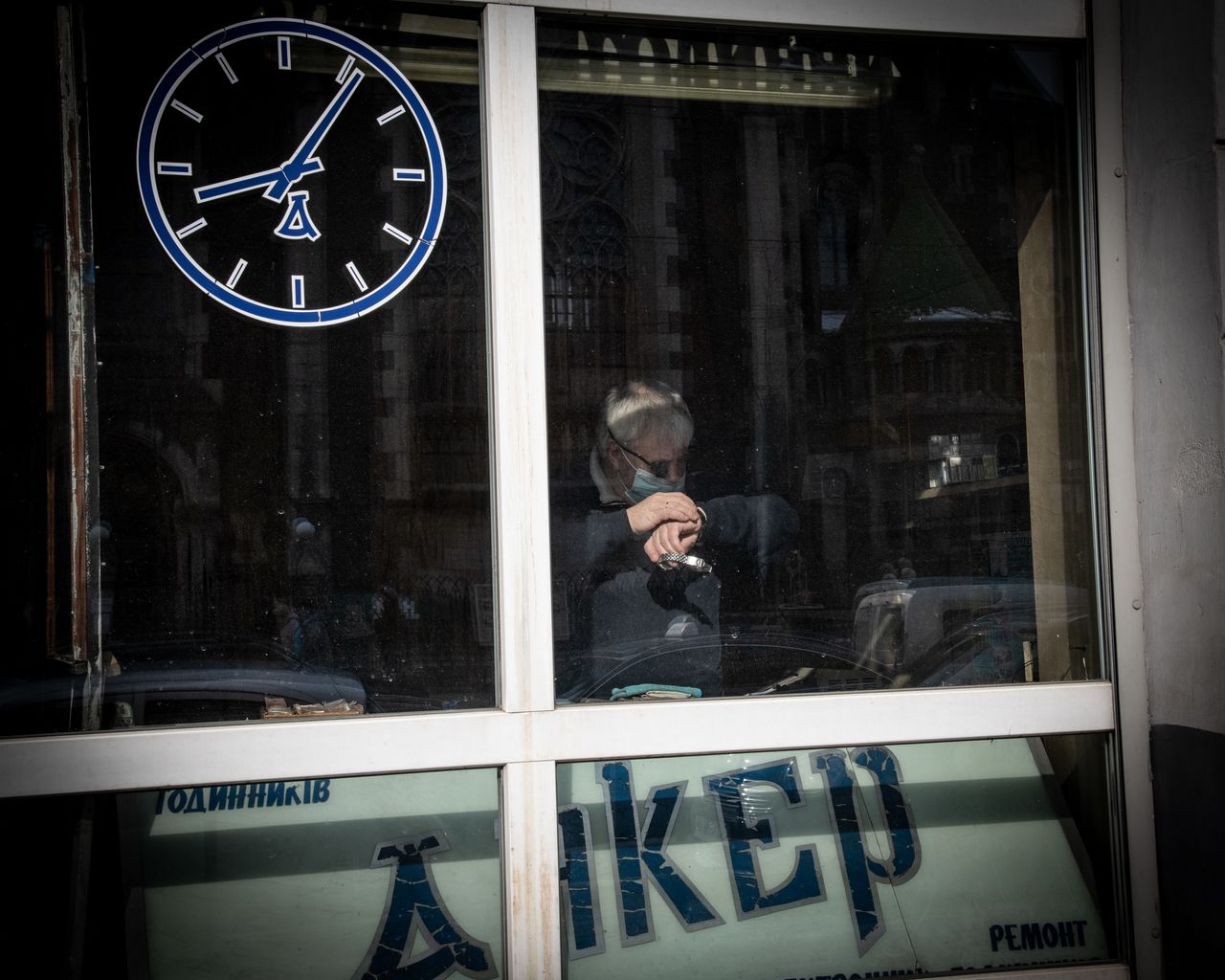 A watch repair shop is among the very few stores that are open in Lviv. Roadblocks have been built in preparation for a Russian offensive.

When Russia launched its invasion of Ukraine from three directions last week, Lviv, a city of 700,000, took on new significance. Far from the chief battlefronts in eastern Ukraine and close to the borders with the European Union, it quickly turned into a channel for food and military aid.

It has also been a natural destination for refugees, both diplomatic and Ukrainian, seeking safe haven.

“They are fleeing terror, pure and simple,” said the city’s mayor, Andriy Sadovyi. “Today Lviv has become a kind of hub—from the east a lot of people. From the West comes a lot of food and materiel that we send onward.” 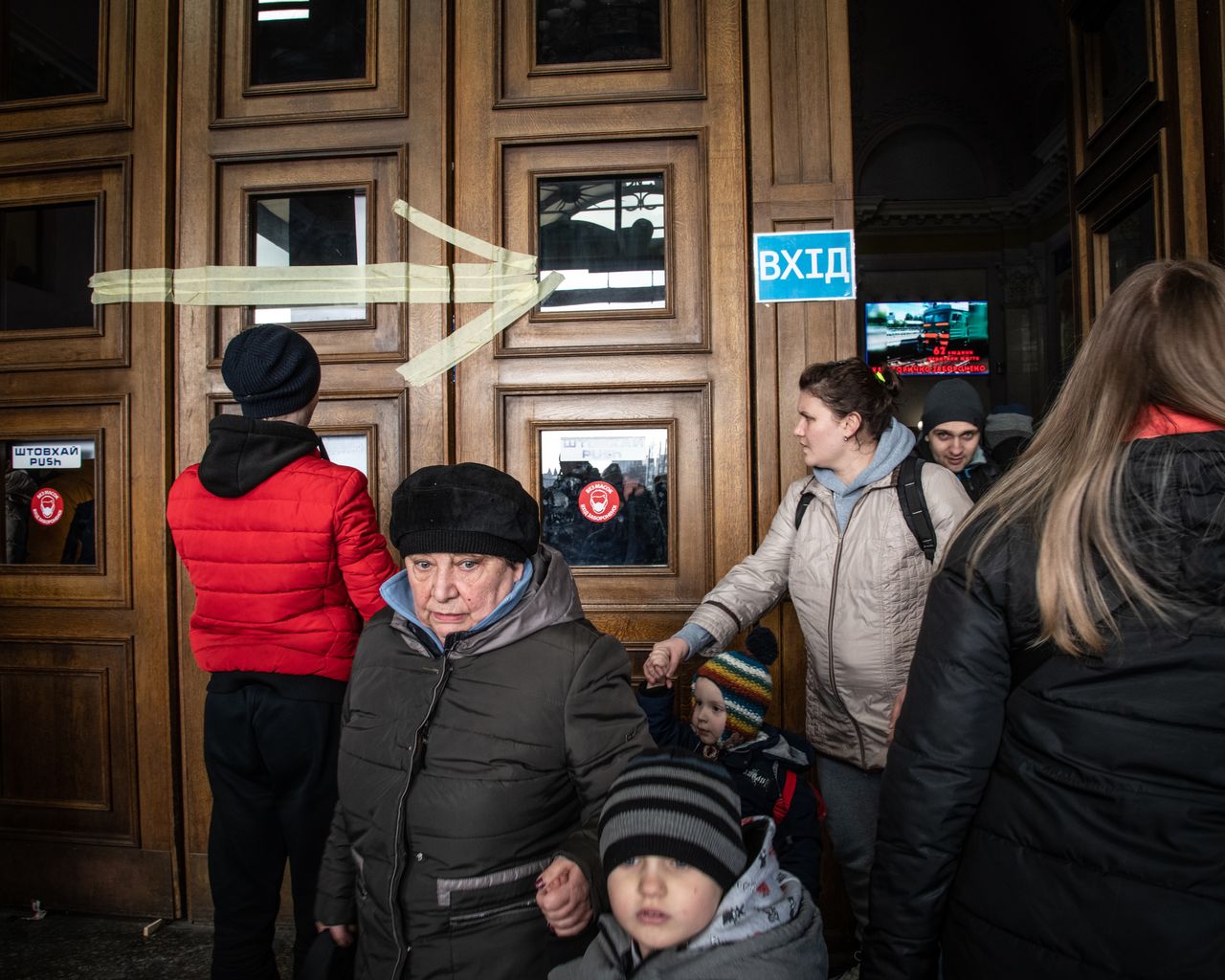 Many Ukrainians have traveled to Lviv’s train station en route to the border. 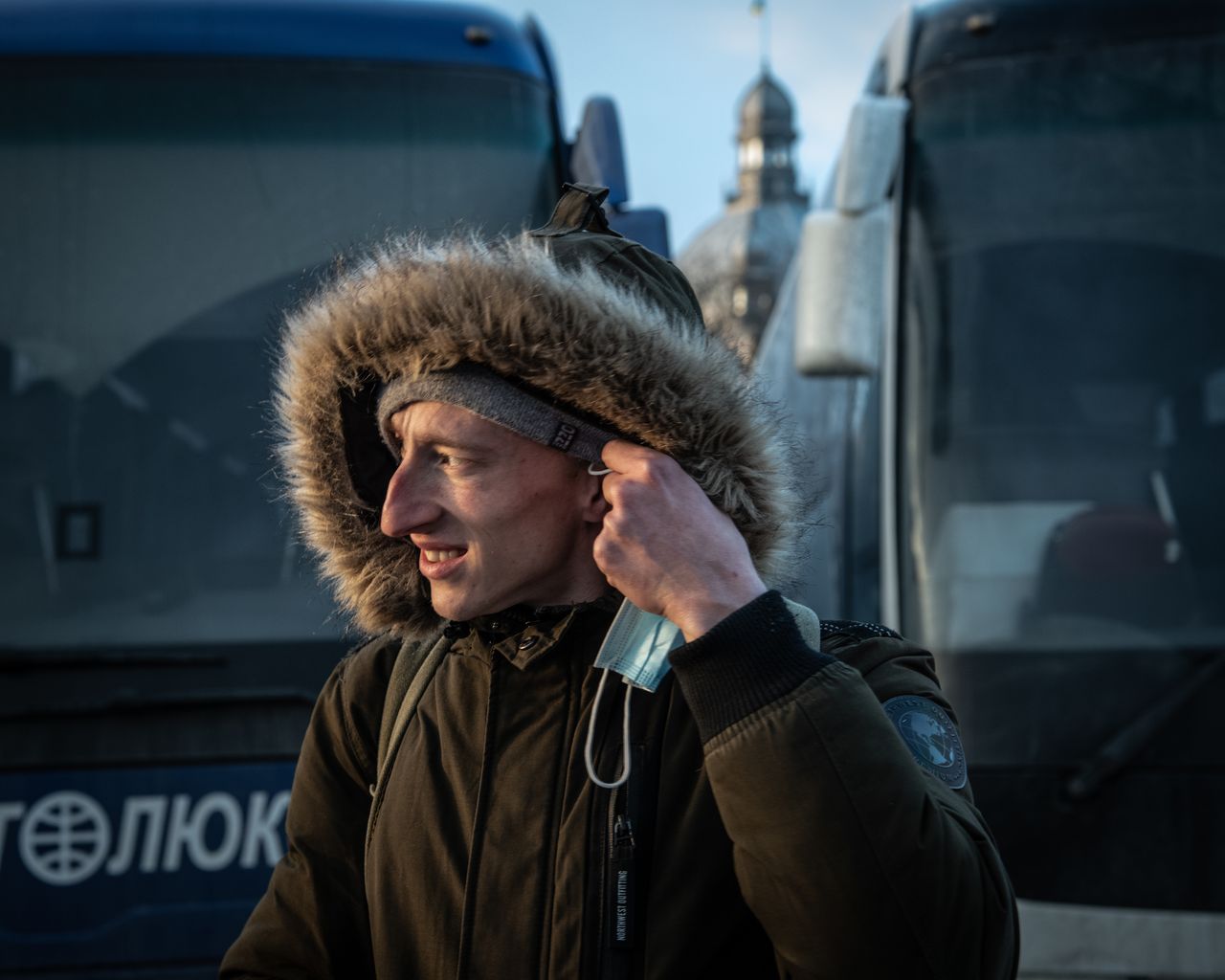 Men have taken family members to Lviv before returning to other parts of Ukraine.

A humanitarian crisis beckons in contested areas of Ukraine, as cities run out of food and residents are too frightened to forage for what there is. As a kind of nerve center for aid distribution, officials like Mr. Sadovyi are acting without a road map. Mr. Sadovyi said that he speaks daily with mayors of major cities further east, organizing trucks and railroad cars of aid in their direction.

This week, he has talked with the mayor of Kyiv, where food shortages have sprung up because grocery-store chains can no longer reach a distribution center, now in Russian-held territory.

The Kyiv mayor, he said, “calls and says, ‘Give me food, give me medical supplies, we need help,’ and so I send him some railroad cars.” 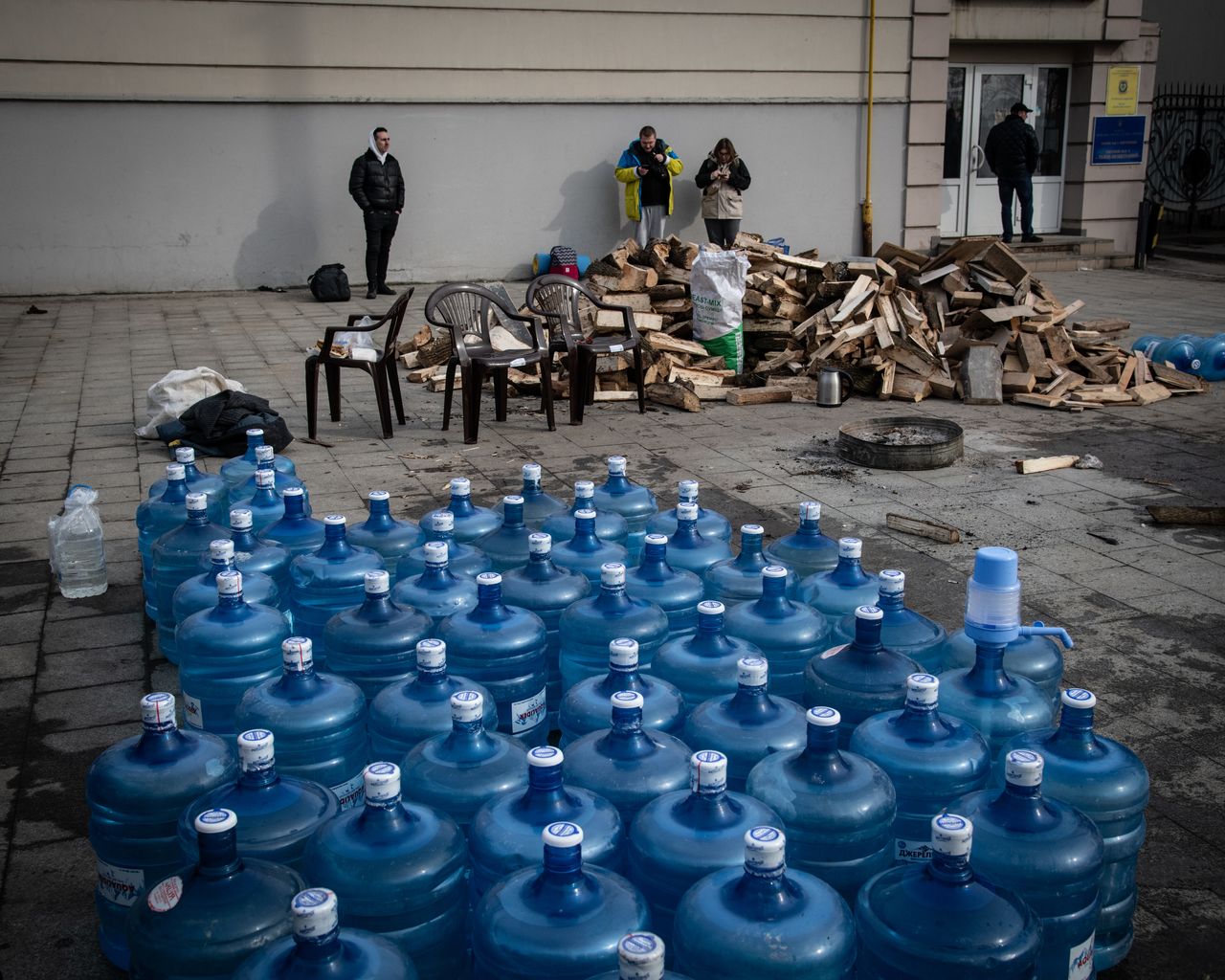 Lviv has been strained by the influx of people who have been displaced across Ukraine. 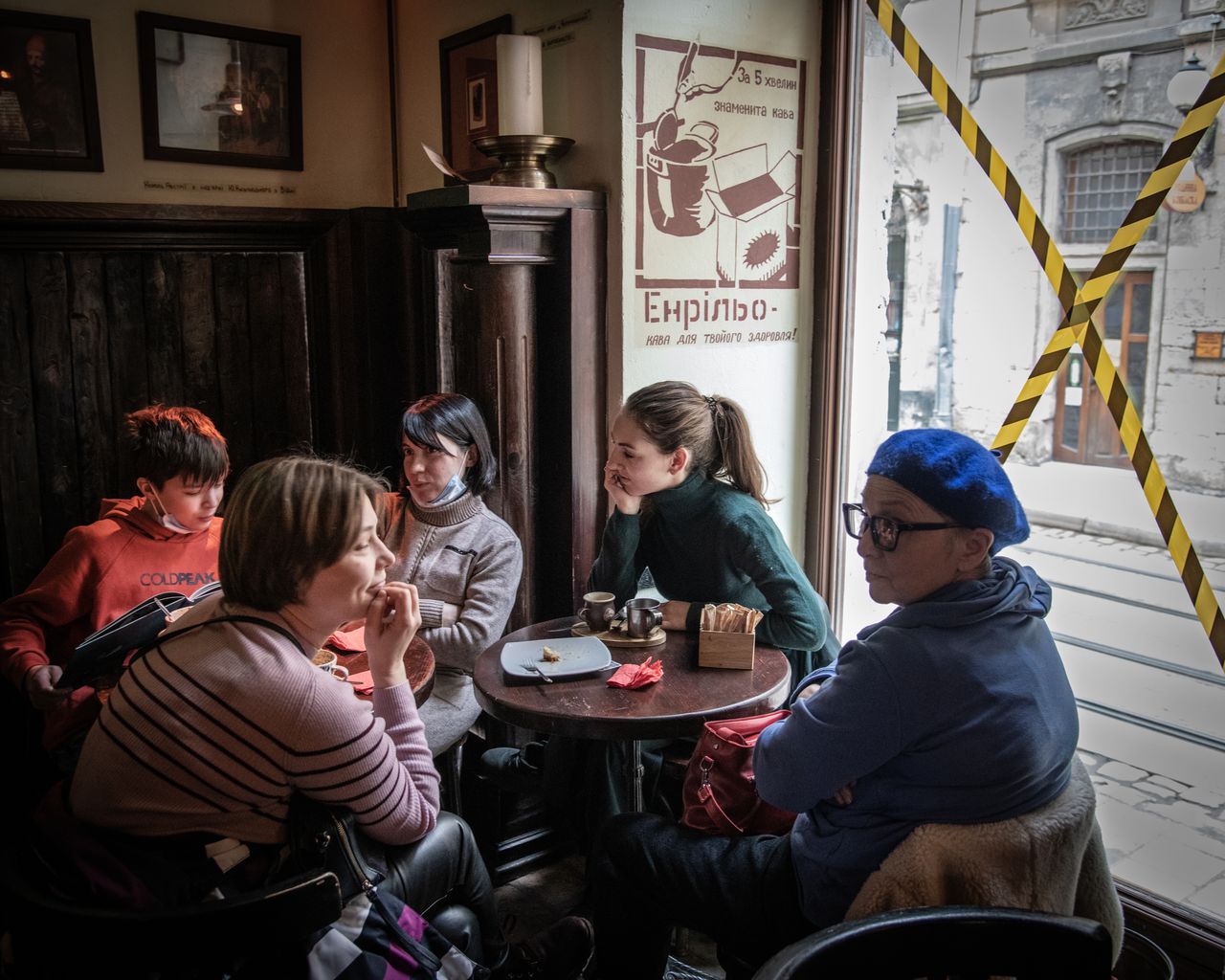 A group of family and friends from Kharkiv arrived in Lviv after traveling for two days.

Lviv itself may be in need of aid as the crisis in Ukraine widens. In the weeks before the invasion, Western embassies counted on Lviv as a safe fallback city, and the U.S. and others relocated their embassy staff here, before shifting again further away from danger, to Poland. After the invasion began, the first big rush of refugees began to arrive, as most of the one million people who the United Nations said have so far fled the country have stopped in Lviv either to stay or to plan their way further west, officials said.

That has put a strain on housing in the city, whose population has swollen by more than 100,000. The city has been lodging the excess in hospitals, university dormitories and a soccer stadium at the edge of town, Mr. Sadovyi said.

This week, Mr. Sadovyi ordered police to impound hundreds of cars that were left abandoned by refugees at the city’s train station, which in better days drew tourists who admired its art nouveau architecture. Refugees left their cars, some in the middle of the road, in their haste to board the next train westward or try to cross the Polish border on foot. A scarecrow-like installation of Russian President Vladimir Putin hung from a balcony. 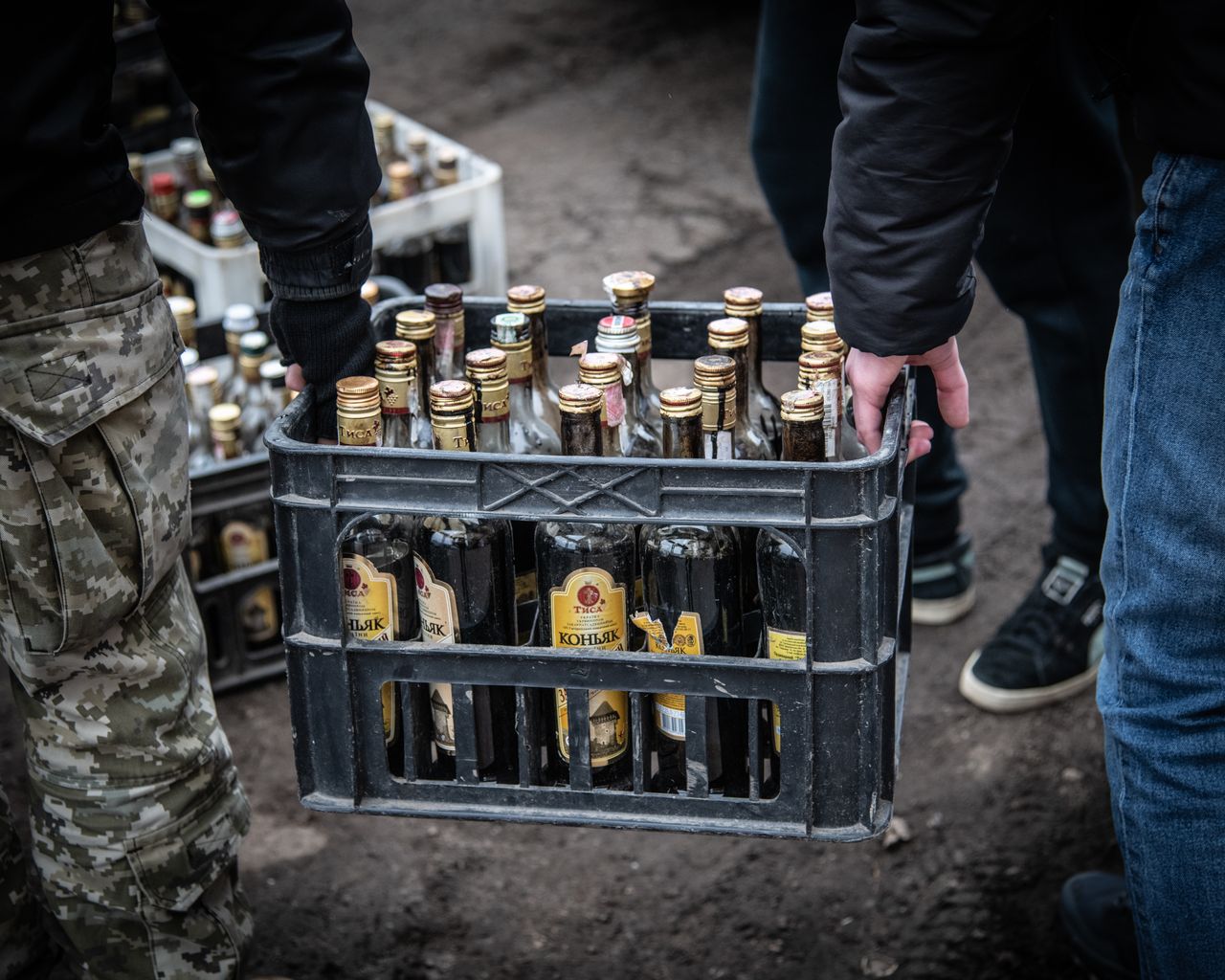 A nightclub was turned into a Molotov cocktail production site for a day.

So far, the brunt of the Russian assault has been toward Kyiv, with an aim toward toppling the government. Moscow’s offensive has been most successful in the south, where this week its forces took the city of Kherson, near the Crimean Peninsula.

Officials fear that another military thrust from the Belarus border could reach the Lviv region within hours, cut off the rail and road arteries to Poland, and starve Ukraine of both food and weaponry.

Lviv’s governor, Maksyym Kozytskyy, said there have so far been scant signs of a coming attack. The city of Lviv hasn’t been bombed since the start of the invasion, and until this week the city’s restaurants and cafes were open regular hours. In the wider Lviv region, there have been three airstrikes, all on the first day of the invasion last week, he said. 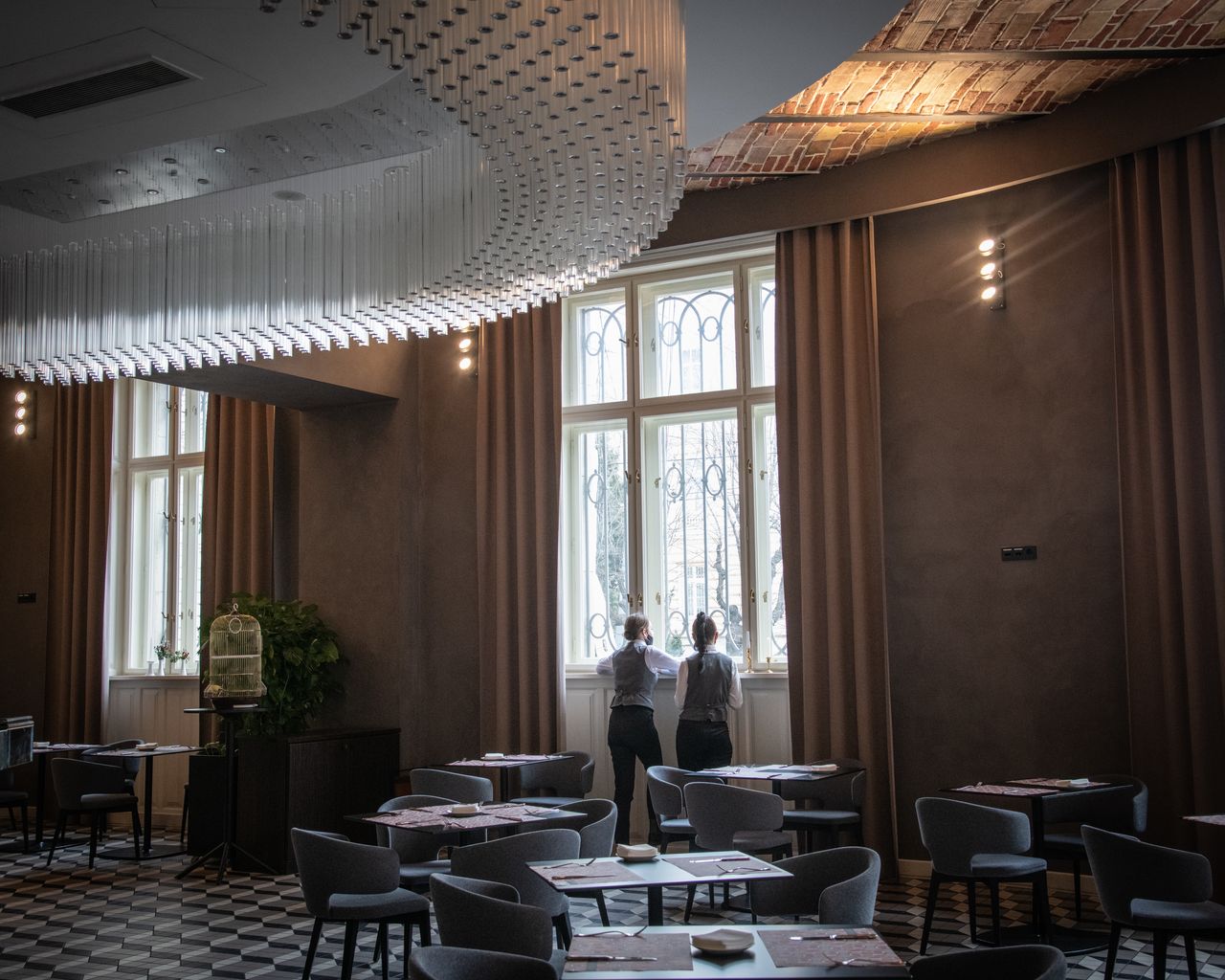 Lviv used to be a tourist destination, with its architectural monuments and vibrant scene of cafes, restaurants and clubs. 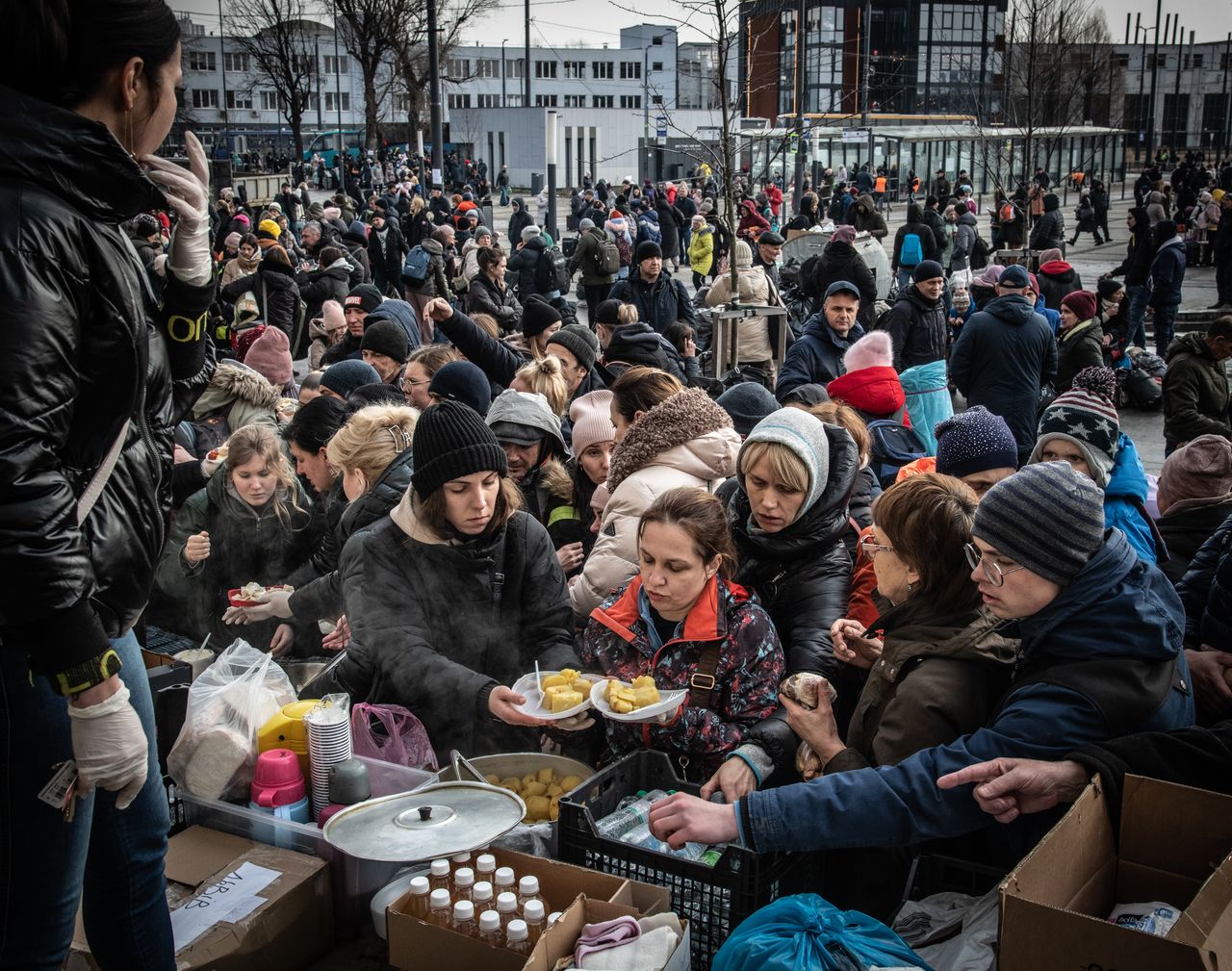 Moreover, Mr. Kozytskyy said the city has historically been a hard target for Russians. Seized from Poland in 1939 by the Soviets when they signed a nonaggression pact with Nazi Germany, Lviv never submitted easily to authority. A deadly partisan revolt against both Nazi and Soviet occupiers was finally crushed by Soviet troops in the 1950s, and today the resistance against Moscow survives in Lviv folklore.

A popular restaurant among tourists, Kryivka, was fashioned from a bunker well-hidden under the city’s streets, where patrons are forced to swear they aren’t spies for Moscow before they enter and are given a shot of vodka.

Today, that restaurant’s owners, which have opened dozens of others, are helping the war effort, said Taras Maselko, spokesman for the restaurant chain, !Fest. One of them, Pravda Beer Theater, now manufactures Molotov cocktails out of its craft-beer bottles, with a moniker on each displaying a naked Vladimir Putin and a slogan likening him to a part of the male anatomy. A hairdresser from Lviv helped to weave masking net for the army. 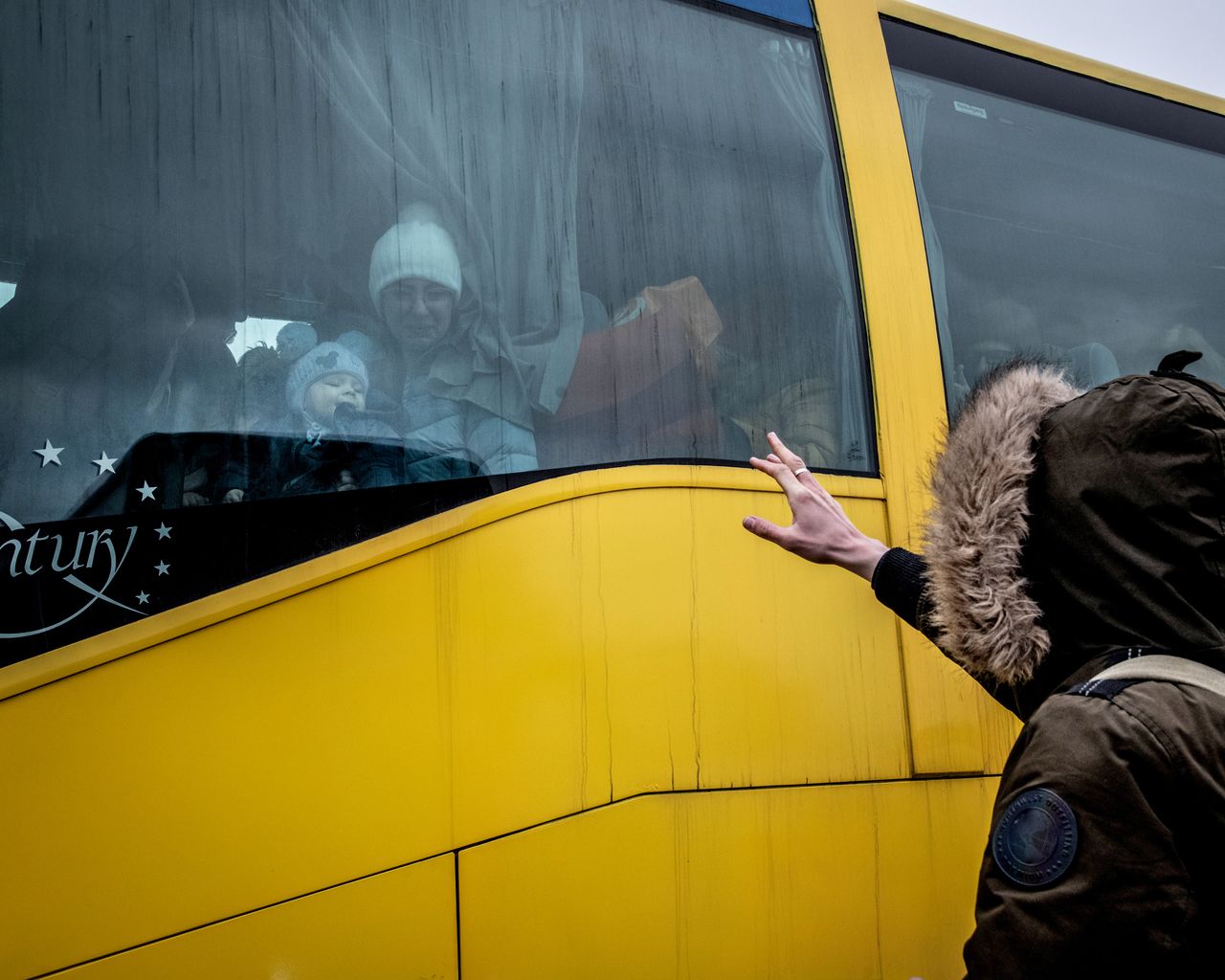 Family members bid farewell to each other as a bus departed.

Mr. Maselko said bartenders have made about 2,000 cocktails so far, and delivered them in cardboard boxes to military units and local territorial defense groups that staff roadblocks. Since the invasion began, government officials have distributed instructions on how to target Russian vehicles with Molotov cocktails, advising them that even armored vehicles can be disabled by setting fire to tires, windows, or the intake ports of their ventilation systems.

How do you think Ukrainian resistance will affect Putin’s military strategy? Join the conversation below.

Until this week, most of the cafes and restaurants that used to draw tourists to the city remained open, but gradually they have closed as the first waves of refugees came and went and the aura of the city became more warlike, said Andrey Hankevych, a local cybersecurity business consultant from New York who has made Lviv his home for the past 20 years.

The waves differed from one another slightly in their composition, he said. Many of the first were young men who were fleeing the fight, and after them came entire families trying to leave the country. When the government declared martial law last week, it said all men between 18 and 60 wouldn’t be allowed to leave the country.

Now Mr. Hankevych said he has seen many families being escorted to the border by men who return to Lviv to prepare to fight. 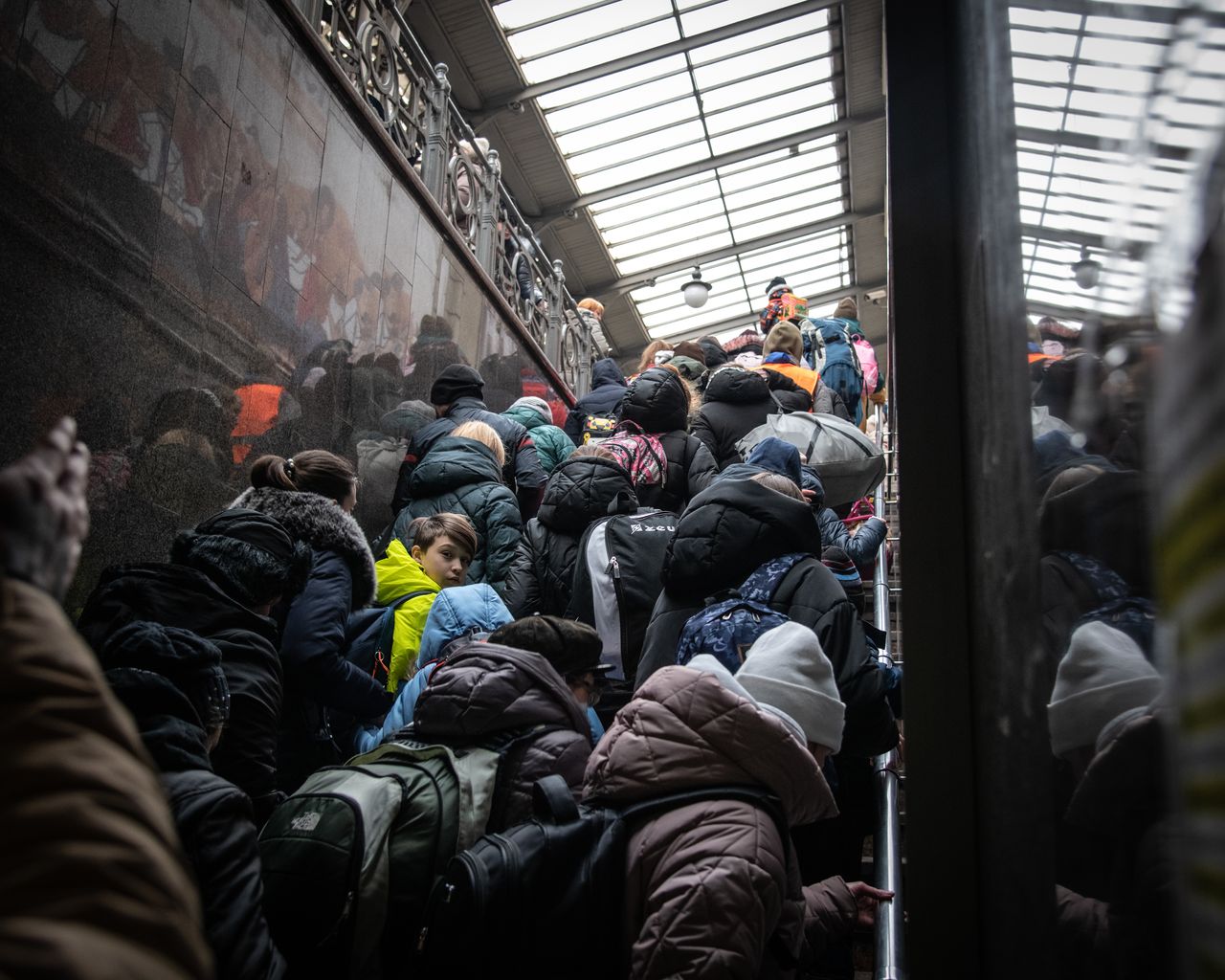 People from all over Ukraine are arriving in Lviv, from where they either travel abroad or stay close to the city. 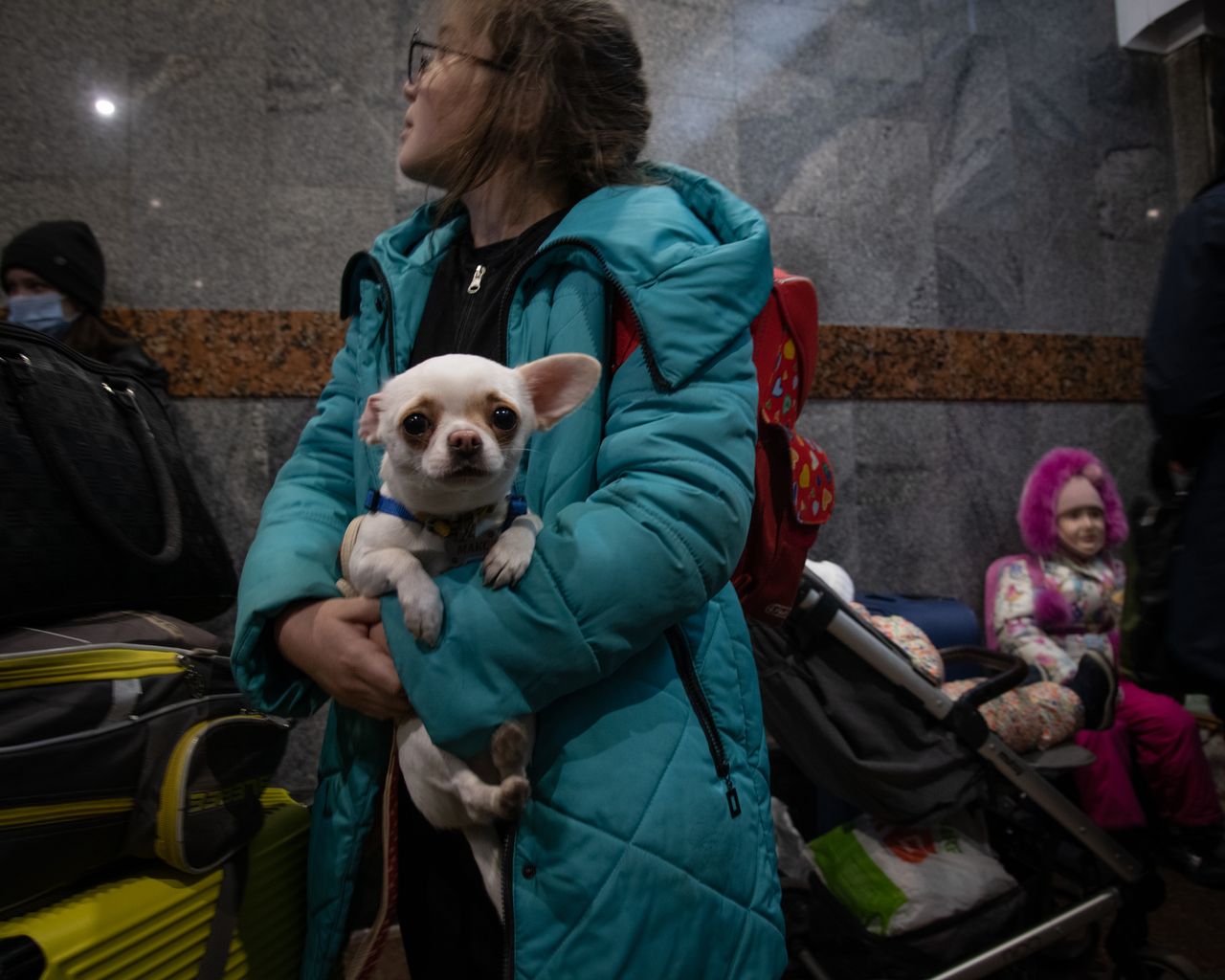 About one million refugees have fled Ukraine since the invasion began, according to the U.N.

“Right now it’s calm before the storm,” said Mr. Hankevych. “Most of the people who are frightened have left already. The ones who remain want to fight.”

One of them, Dmitro Zahlyuskyi, 24, said that he dropped his mother and two brothers at the Polish border crossing earlier this week, and returned to Lviv where each day he has been helping to knit camouflage nets near the city hall with other volunteers.

A native of Kyiv, he said he was sorry to say goodbye to his family, but that he didn’t want to be in Poland while Ukraine was at war with Russia. “What would I do there, sit in a cafe and drink cappuccino?” he said. “It would have been upsetting.”

Write to Alan Cullison at alan.cullison@wsj.com