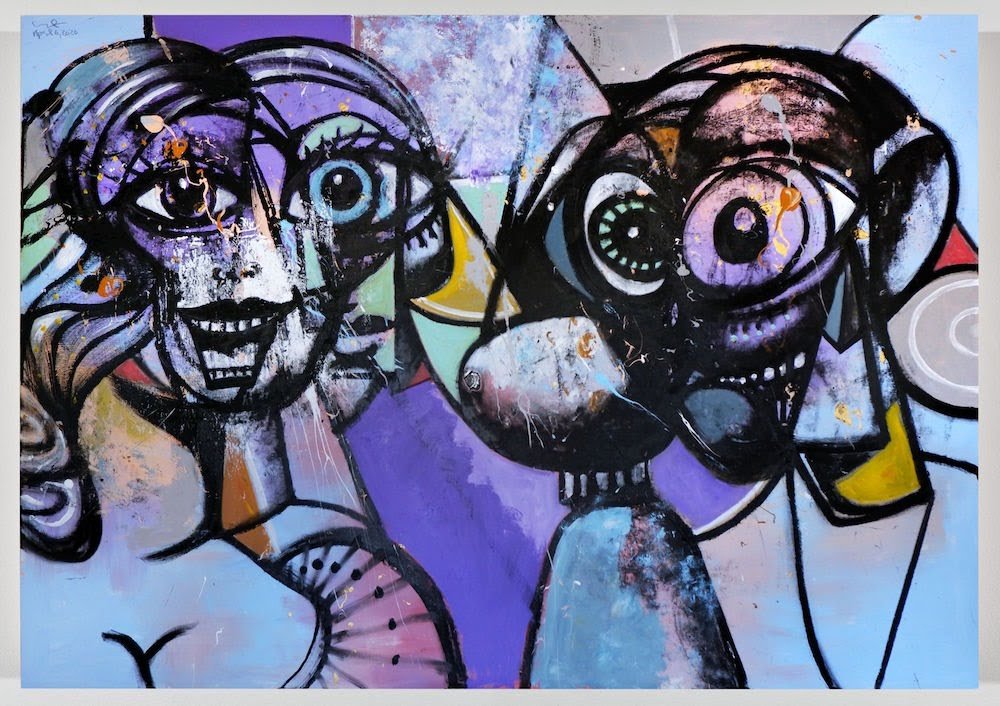 There may be no better reflection of the current art-world moment than a virtual art-fair booth that is comprised of photos taken at a gallerist’s home, viewed from a collector’s couch. That was the dynamic for Axel Vervoordt Gallery at the first online version of Frieze New York, which opened to VIPs on Wednesday. (Yes, even online, fairs have VIP days; this one required two-factor authentication to gain admission.)

In lieu of the serpentine tent on Randall’s Island, Vervoordt and more than 200 other dealers set up virtual shop in Frieze’s online viewing rooms. (The fair officially launches to the public on May 8 and runs through May 15.) Vervoordt presented works by Dansaekhwa artist Chung Chang-Sup installed in Vlaeykensgang, Antwerp, where gallery director Boris Vervoordt lives. Two works, priced between $45,000 and $220,000, sold by the end of the first day.

“It actually feels good we didn’t send several crates flying across an ocean and instead have the opportunity to enjoy these works in our home,” Vervoordt said. “These times require innovative ideas and moments of reflection. Somehow, the slower pace creates a better understanding.”

Dealers have had little choice but to embrace the format. Seemingly overnight, a business that had been high-touch and extremely cosmopolitan became simultaneously entirely digital and quite a bit more homespun than it used to be. At this fair, photographs of works on offer were sometimes taken in artists’ homes (complete with paint-spattered floors) and dealers posted their cell phone numbers on their gallery pages. For the mega-galleries and a selection of smaller dealers (though, to be sure, not all of them), the approach paid off: sales were happening at a steady clip. 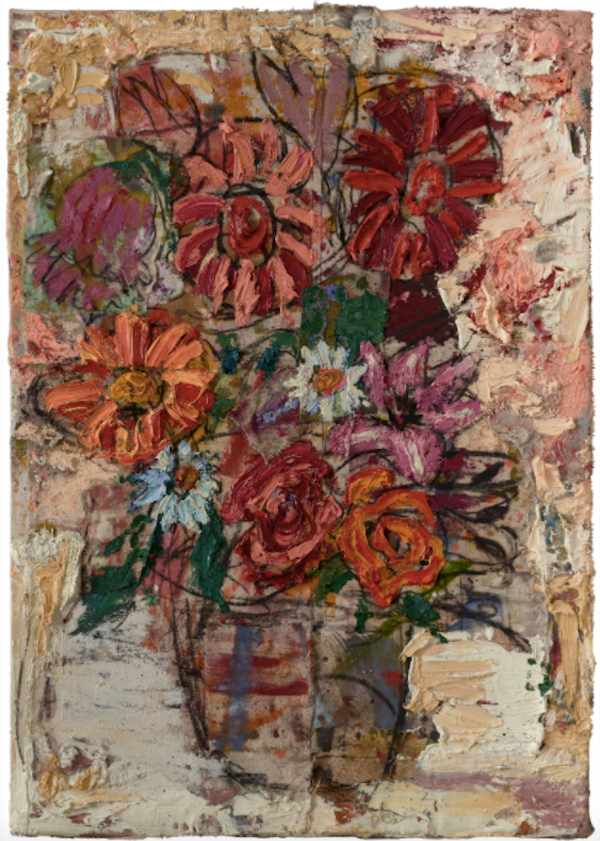 During the first hour of the VIP preview, for example, Timothy Taylor sold five of six paintings from its solo presentation of British artist Daniel Crews-Chubb for prices ranging from $20,000 to $45,000 to a mix of American and European collectors. But as at most fairs, some of these early transactions were cemented in advance, offering a somewhat airbrushed view of buying activity out of the gate.

Like many dealers, Hauser & Wirth opted not to try to recreate the traditional fair experience but rather adapt its offerings to the viewing room format. With artists everywhere on lockdown and, in many cases, cut off from access to their studios, the gallery invited artists to create new work that reflects their current situation of quarantine and isolation.

“It’s very important to be as specific as possible, to bring today’s mood into our presentation, and really lean in,” gallery partner Marc Payot told Artnet News. “Obviously the photography can’t be great because you can’t have professional photos of the work. The [online] presentation is far from perfect and not refined in the sense it would normally be.” But at the same time, he noted, the more casual nature of the photos “really reflects the moment.”

For a gallery like Hauser, which represents many artists that already have lengthy waiting lists and widely recognized styles, such an approach is a relatively easy sell. By the end of the first day, the gallery reported 16 sales, including George Condo’s Distanced Figures 3 sold for $2 million; Rashid Johnson’s Broken Men sold for $245,000; a drawing by Paul McCarthy priced at $495,000; a mixed-media work by Lorna Simpson for $350,000, and paintings by Rita Ackermann and Henry Taylor for $275,000 and $225,000, respectively.

The gallery also sold works by new additions to its roster, including a glazed stoneware sculpture by Simone Leigh for $110,000; an untitled 2019 work on paper by Avery Singer for $150,000; and two new Nicolas Party watercolors for $60,000 each.

Payot noted that a new group of younger viewers has cropped up with the online art fair, a platform he deems more “democratic” than the physical fair, which boasts pricey admission tickets.

Piano Nobile, in the Spotlight section, reported early sales of three works by Leon Kossoff, including a painting for $1.8 million, which is just above the auction record of £1.39 million set at Christie’s London in November 2018. Meanwhile, a work on paper sold for $65,000.

“For a long time, Kossoff has been overshadowed in the market place by the other School of London painters, particularly Frank Auerbach with whom he is most frequently compared by the critics.  But the market is now beginning to understand his real worth,” said founder Dr. Robert Travers,

To be clear, this is not boom times—many, if not most, dealers had no works labeled “sold” by the end of the first VIP day, and sold-out or nearly sold-out booths were the exception, not the rule. More common were booths with one or two works off the market. But as Frieze’s global director Victoria Siddall said in a press conference over Zoom, this event is “about getting everyone through this time” and making sure businesses come out the other side as healthy as possible.

To that end, Frieze refunded galleries 100 percent of their booth fees for the New York fair and provided access to the viewing room for free. As Vervoordt noted, the platform itself—which had been in the works long before the lockdown era began and was initially developed as a complement to the IRL fair—”has a stylish, to-the-point interface and when exploring the fair, you sense that Frieze is a community.”

The site also allows users to search by various categories including artist gender (there were four works by women for every five by men, and a total of 31 works by artists who identify as transgender or non-binary) and artistic medium (painting, unsurprisingly, was by far the most common medium, with 1,636 examples, while the sound/audio category was represented by a grand total of one work).

Most helpfully, the site also allows users to search by price bracket. This element is not without its frustrations, however: a search for items under $10,000 yielded nearly 1,500 works with no way to further break down results, and several six-figure works inexplicably turned up in this grouping.

Still, dealers who found success seemed to find it at a variety of price points, challenging conventional wisdom about what sells online (which, up until now, has largely been regarded as lower-priced items under $100,000). Ortuzar Projects of Tribeca sold a painting by Dororty Iannone for $150,000 and three paintings by David Robilliard for $45,000 each.

Meanwhile, Gagosian unveiled new spray-paint-blasted works by Katharina Grosse, which found an eager audience. By the end of the day, eight of the works—which gallery director Deborah McLeod described as “bite-size and easy to acquire”—sold at prices ranging from €40,000 to €145,000 ($43,000 to $157,000).

At the other end of the price gamut, the gallery is also hosting a single-artist viewing room on its own platform, complete with bells and whistles like bespoke videos and market research. The presentation dedicated to Cecily Brown’s massive Figures in a Landscape (2001), priced at $5.5 million, went live on May 4. “You have quite a breadth and two ends of the spectrum—easy pricing on the primary works coming out of Grosse’s studio and, at the other end, you have a masterpiece with all the attendant research,” McLeod said.

Pace, another mega-gallery with swift sales, sold 13 works from its “Perspectives” presentation spotlighting artists from its contemporary program at a range of price points. These included a 2019 painting by sought-after painter Loie Hollowell priced at $250,000; Nigel Cooke’s 2020 painting Oceans, part of a new series he made while in isolation in the UK over the past two months, for $250,000; a recent nine-part Mylar work by Adam Pendleton for $135,000; and three photographs by Nina Katchadourian from her “Sorted Books” series for $3,800 each.