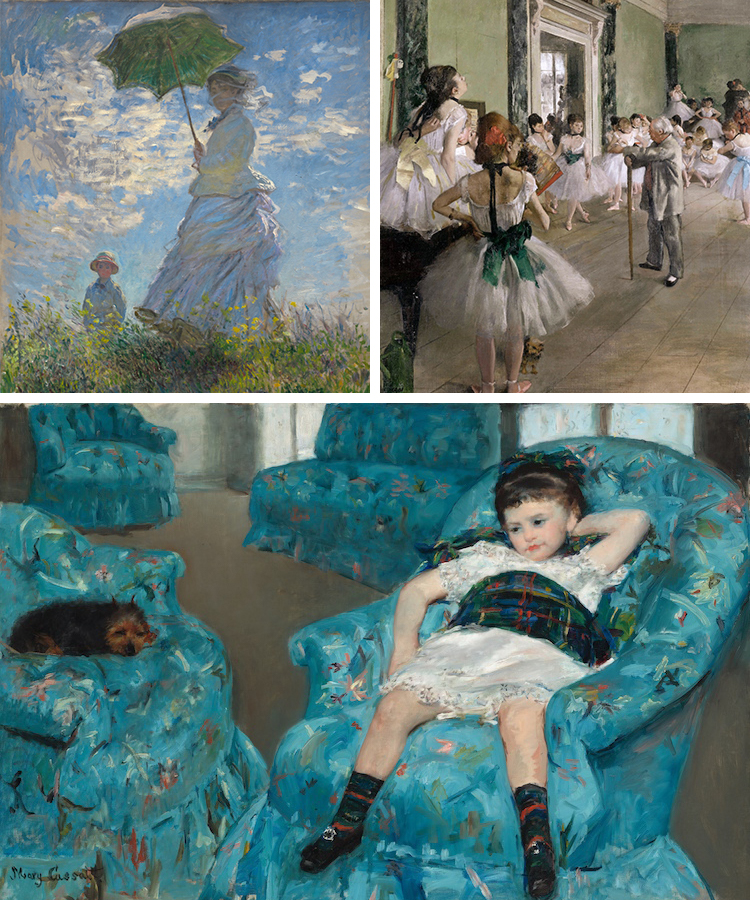 Most of art history can be traced to the formation of different art movements. From the drama of the Baroque to the emotion of Romanticism, these movements reflect the views of the time. Then, in the 1870s, a new revolutionary style emerged, called Impressionism.

Led by Claude Monet, Camille Pissarro, Edgar Degas, and Pierre-Auguste Renoir, this groundbreaking movement went against the painting standards of the time. Instead of pursuing realism, Impressionist artists emphasized light, movement, and atmosphere in their portrayals of everyday life. As a result, their works captured fleeting moments in time.

Want to learn more about Impressionism? Scroll down to see a selection of 15 famous paintings by the masters of this iconic 19th-century style.

Claude Monet exhibited Impression, Sunrise in the First Exhibition of the Impressionists, an independent show hosted by Paris’ avant-garde artists. Its radical style and apt title led to a flurry of negative reviews by local art critics.

“They are impressionists in that they do not render a landscape, but the sensation produced by the landscape,” Jules Castagnary of Le Siècle, wrote. “The word itself has passed into their language: in the catalog, the Sunrise by Monet is called not landscape, but impression. Thus they take leave of reality and enter the realms of idealism.”

In the end, however, it was this painting and its reviews that gave Impressionists their name.

Berthe Morisot was one of les trois grandes dames, or “three great women,” of Impressionism, alongside Mary Cassatt and Marie Bracquemond. The Cradlewas exhibited alongside Monet’s Impression, Sunrise at the First Impressionist Exhibition of 1874, and received praise for its “feminine grace.”

Claude Monet, Woman with a Parasol, 1875

Woman with a Parasol depicts Monet’s wife and young son atop a grassy hill in Argenteuil. He uses an array of expressive brushstrokes in the sky and field to create a windy atmosphere. Similarly, the drapery of his wife’s white, voluminous gown and the straps of her bonnet enhance the breeziness of the moment.

While most Impressionists depicted outdoor scenes, Edgar Degas preferred human subjects and interior spaces. In particular, he dedicated much of his creative career to capturing performers at work, most notably, ballerinas. The Dance Class is one of his earliest forays into this field.

“People call me the painter of dancing girls,” Degas told Parisian art dealer Ambroise Vollard. “It has never occurred to them that my chief interest in dancers lies in rendering movement and painting pretty clothes.”

Place de la Concorde depicts artist and patron Ludovic-Napoléon Lepic with his daughters and dog at a public square in Paris. The large amount of negative space, cropped figures, and unusual composition suggest Degas was influenced by photography.

Compared to other Impressionist paintings, and even many other works by Degas, L’Absinthe stands out for its subdued color palette and dark subject matter. It portrays a woman and man at a table in a bar, both of whom appear visibly despondent. In front of the woman is a glass of absinthe, which was a popular drink of the time. Although it was a controversial painting during Degas’ lifetime, it has since become significant for its portrayal of a less-seen “impression” of contemporary life.

Pierre-Auguste Renoir created Bal du moulin de la Galette in 1876, while Impressionism was still in its early stages. It depicts a crowd of jubilant people including actors, artists, critics, and Renoir’s family members at the original Moulin de la Galette, an outdoor dance hall in Montmartre. The sun-dappled lighting, delicate brushstrokes, and sensual female figures are all emblematic of Renoir’s style.

La Gare Saint-Lazare is the first in Monet’s series of 12 paintings based at the Gare Saint-Lazare railway station in Paris. It captures a train in motion, as plumes of steam and smoke fill the building and cloud the sky, and pedestrians dot the train tracks below. This series stands out in Monet’s oeuvre for its more urban subject matter—as the artist was better known for his nature-inspired works.

Painted in 1877, Paris Street; Rainy Day is one of Gustave Caillebotte’s most celebrated paintings—and a key piece of Impressionism. While more realistic in the modeling of its figures, the piece employs a striking composition with cropped figures that is clearly inspired by the new practice of photography. Altogether, this serves to capture a fleeting “impression” of a contemporary city scene, which was a core desire of the art movement.

While not as widely known as other Impressionists, Mary Cassatt was one of the pioneers of early modern art. Originally from America, she moved to Paris to pursue a career in painting. There, she came into contact with Degas and other Impressionists and joined their movement. Little Girl in a Blue Armchair is one of her most successful works and an early example of her depictions of children. The asymmetrical composition also demonstrates Degas’ influence, who was her teacher for many years.

Luncheon of the Boating Party was displayed at the Seventh Impressionist Exhibition in 1882 to wide appreciation. The painting combines all of the subjects that Renoir most loved to paint—still lifes, portraits, and outdoor scenes. Again, this oil painting focuses on leisure activities, as the group is shown having lunch on the sunny balcony of the Maison Fournaise, a restaurant where one could rent boats not far from Paris.

As Cassatt’s painting matured, she focused on one subject in particular—mother and child relationships. The Child’s Bath is one of her most iconic pieces for its striking perspective, pastel color palette, and composition. It also reflects Cassatt’s fascination with Japanese woodblock prints—a popular muse for many Impressionists of the time.

As one of the founding members of the Impressionist movement, Camille Pissarro played a large role in developing the style and encouraging independent exhibitions of an artist’s work. His most famous works depict urban scenes from high-up angles. Pont Boildieu in Rouen, Rainy Weather is part of a series of works he made while staying in Rouen.

Pissarro describes the painting in a letter: “The theme is the bridge near the Place de la Bourse with the effects of rain, crowds of people coming and going, smoke from the boats, quays with cranes, workers in the foreground, and all this in grey colors glistening in the rain.”

The Large Bathers was made after Renoir visited Italy and saw some of his favorite works by Titian and Raphael in person. As a result, this piece continues the tradition of bathers in art in the Impressionist style. It depicts three women bathing in the foreground while two wash in the background. While at first, the painting received mixed reception for its departure from typical Impressionism, it has since become a favorite for its attempt to merge history with modernity.

From 1883 until his death 43 years later, Monet lived in idyllic Giverny, France. There, he surrounded himself with beauty, as evident in his home’s sunny interiors, the collection of Japanese woodblock prints that hung on his walls, and the oriental-inspired gardens he constructed steps from his front door—a colorful creation he famously called his “most beautiful masterpiece.”

Water Lilies with a Japanese Bridge depicts the crown jewel of his garden—the Japanese bridge which frames the man-made pond of water lilies.