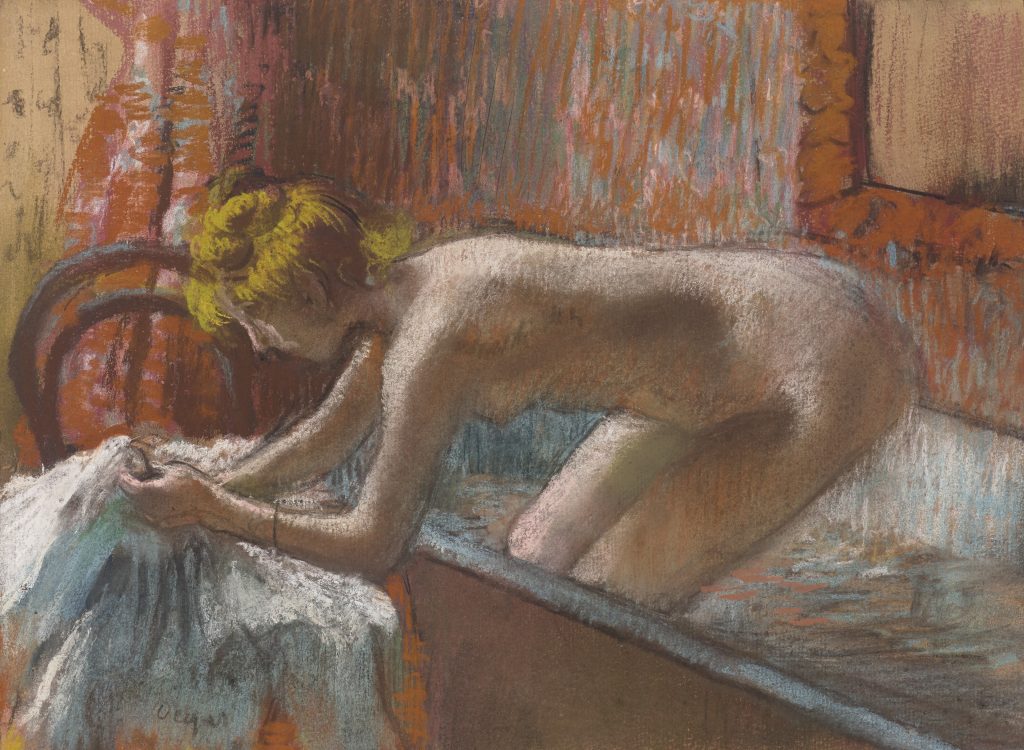 ‘These women of mine are honest, simple folk’ — a bather and a ballerina by Edgar Degas

Degas’ pastels matched even his most dazzling oil paintings for richness of colour. Offered on 30 June are two late works that showcase the artist’s unrivalled mastery of the medium

In 1884, as he approached his 50th birthday, Edgar Degas was wracked by introspection — one might even say he was in crisis. As he confessed in a letter to his friend Henry Lerolle, ‘I am blocked, impotent.

‘Whatever I was doing, and whatever I was prevented from doing… I never despaired of getting down to it some day. I stored all my plans in a cupboard and always carried the key on me. I have lost that key.’

Degas felt it was easy to flourish in one’s twenties and thirties, but much, much harder at 50. He had contributed to the first six Impressionist exhibitions, from 1874 to 1881, but not the seventh, which opened in 1882.

Against the odds, what Degas did next was to produce some of the most remarkable imagery of the late 19th and early 20th centuries.

He narrowed his artistic focus, setting aside his one-time interest in singers, circuses, horse-racing and laundresses. He would now concentrate on ballerinas and female bathers, almost confining himself to iterations of those two subjects.

Another crucial development was his fast-growing preference for pastel over oil paint. In the eyes of his fellow Impressionist Renoir, the work from the latter part of his career surpassed all that had gone before.

‘Had Degas died at 50, he would have been remembered as an excellent painter,’ Renoir said in old age. ‘[But] it’s after his 50th year that his work broadened out and he really became Degas.’

In Femme sortant du bain, we see a naked woman as she finishes a bath and reaches over the edge of the tub for her robe. Bright sunlight falls through a window on the left, creating a delicate play of light and shade along the length of her body.

In Danseuse rose, Degas offers another glimpse behind closed doors, this time of a lithe young dancer taking a break between rehearsals. She is stretching her right leg, which is propped up on a bench beside her. In the process, she leans her whole body over towards her right foot.

With his multiple images of bathers and ballerinas, Degas took the opportunity to investigate the intricacies of the human body in movement. In the case of the works coming to auction, he focuses on the tautness of each subject’s limbs, caught as they are in moments of reaching or stretching.

‘These women of mine are honest, simple folk… It is as if you looked [at them] through the keyhole’ — Edgar Degas

More than that, there’s also a fascinating element of voyeurism. ‘Up to now, the nude has always been represented in poses which presuppose an audience,’ Degas said — arguing that, since the Renaissance, the genre of the female nude had consisted of women’s bodies being shown off for the delectation of male viewers.

Degas, however, offered something different. ‘These women of mine,’ he said, ‘are honest, simple folk… It is as if you looked [at them] through the keyhole.’

With their faces partially or wholly hidden from us, the artist’s nudes — like his dancers — go about their private business totally unaware that they’re being watched.

What was it about pastel that attracted him? In essence, it is powdered pigment that is mixed with a binder to form sticks in various colours; those sticks are then applied to paper.

Artists such as Maurice-Quentin de La Tour and Rosalba Carriera had taken the medium to heights of sophistication in the 18th century. It had largely fallen out of fashion by Degas’s day, but the Frenchman loved the fact that pastel is far more rapid to use than oil paint — and thus lent itself to his restless and experimental methods.

Degas ended up advancing the medium in many ways. He was known to blur his colours ever so slightly with the aid of steam, for example.

Perhaps most tellingly of all, Degas preserved each layer of pastel with a fixative. This meant he could build up layers of bright hues that would otherwise be disturbed — and the result was a scintillating optical mix.

Christie’s Online Magazine delivers our best features, videos, and auction news to your inbox every week

In Danseuse rose, the colours range from turquoise and apple-green to soft corals, delicate pinks and pale lavenders: a dance of colours, one might say, befitting the depiction of a ballerina.

In Femme sortant du bain, the bather’s body is imbued with the warmth of peach. The bathroom wallpaper, meanwhile, consists of long parallel strokes of orange, pink and blue, which shift and change tone in the falling light.

With the pastels of his later years, Degas matched even the most dazzling Impressionist oil painting for richness of colour. From having been ‘blocked’ in 1884, he was utterly liberated thereafter.

Posted in Alternative investment, Art fund, art portfolio, Fine Art, hedge fund, Painting
← How to Be an Artist, According to Henri Matisse‘There’s Much Less Order Than Ever Before’: Auction Houses Are Entering the Post-Lockdown Era—But They’ll Never Be the Same →